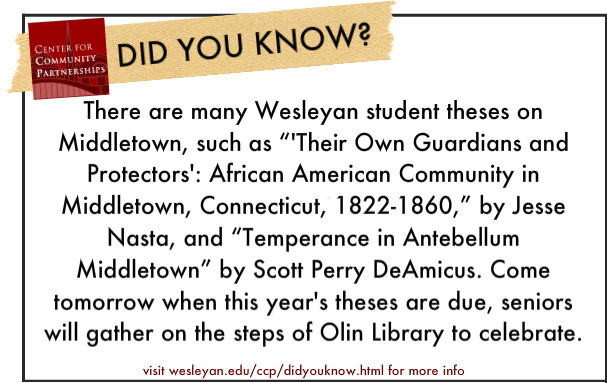 In addition to outlets such as courses, service work, and general engagement, Wesleyan students interested in the history of Middletown write theses and other essays.

Wesleyan theses pertaining to Middletown have included titles such as “Their Own Guardians and Protectors’: African American Community in Middletown, Connecticut, 1822-1860,” by Jesse Nasta, and “Temperance in Antebellum Middletown” by Scott Perry DeAmicus. To see more Wesleyan theses on Middletown visit the WeScholar site.

As for today, students are gearing up for the final thesis deadline, which is tomorrow, April 12th. When theses are due at 4PM, the writers will gather on the steps of Olin Library, pop bottles of champagne, and toast to their months and months of research, writing, drafting, and doing whatever they could to quell their anxieties. To check out last year’s celebration, jump over to Wesleying.