One challenging aspect of post-grad life is that there often isn’t as much time for the extra- and co-curricular activities that make ours lives at Wesleyan so rich and rewarding. Fortunately for our dedicated student activists, there are in fact jobs where grads can continue to work on the causes they care about, even to do so on college campuses. One such opportunity is with the Student PIRGs (Public Interest Research Groups), which are independent statewide organizations that mobilize college students to address environmental protection, homelessness, and other pressing public interest problems. 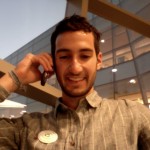 Zach Burns ’14 has kindly offered to answer a few questions on the joys and frustrations of his work as a campus organizer for the Student PIRGs. If you are interested in doing similar work, email Zach with any questions (zburns@wesleyan.edu) and apply to be a campus organizer by Monday!

Tell me about your work with PIRG. What campaigns have you worked for and on which campuses?

I’m stationed at Salem State University, a 10,000 undergraduate public institution in Salem, MA.  In some ways it’s a different world from Wesleyan, but in most ways it’s not.  The faculty are smart, accessible, and prioritize teaching; the students are compassionate and driven, though they didn’t necessarily get the breaks that many Wesleyan students grew up with.

Last semester I worked on the New Voters Project, organizing a team that helped to register over 600 students to vote in the midterm election.  I also organized a team to advocate for the Yes vote on Massachusetts’ second ballot initiative to update the Bottle Bill.  When a bottle has a five cent deposit on it, it gets recycled four times as frequently as a bottle without a deposit.  So the Yes vote would place deposits on soda, juice, and sports drinks and dramatically increase recycling rates.  Partly due to the millions of dollars the soda industry poured in to defeat the Bill, we lost; but it was an incredibly exciting first political campaign for me.

This spring I’m advocating for Salem State to adopt open textbooks, which are free, online alternatives to the traditional egregiously-priced physical books; I’m working on a campaign to push the Massachusetts legislature to commit to 20% solar power by 2025; I’m working on a national initiative to help avoid antibiotic resistance by calling on Mcdonalds to exclusively purchase antibiotics-free meat; and I’m overseeing a fundraising and service campaign to help alleviate hunger and homelessness in the Salem area.

What does a typical day look like for you?

Wake up early having dreamt about something Student PIRGs-related; browse through ten texts from students either bailing out of a volunteer shift or proposing a clever campaign tactic; meet a student to pitch her on taking on more leadership; join a conference call with fellow staff across New England to talk strategy; check in on a volunteer-led PIRG table in the dining hall, where students are collecting photo petitions for the McDonalds campaign; call a Wesleyan senior to elucidate the job opportunity (and likely attempt to describe what an average day is like); meet a campus administrator to lobby her on adopting an open textbooks program; oversee a volunteer-led phonebank to invite students to tomorrow’s events; hang out afterward with students–get to know their motivations and strengths so I can keep them engaged down the road; submit a nightly spreadsheet to my boss quantifying everything that happened on campus that day; think through tomorrow and make sure everything’s ready to go; then get the heck off campus.

What made you want to work with this organization?

Toward the end of my Wesleyan years, I was frustrated with the ratio of talking about social problems to actually working toward their solutions.  I did plenty of green work on campus, but at the end of the day I knew I wasn’t making that big of an impact.  The Student PIRGs are a national organization: I knew that any campaign work I’d do would be amplified by fellow staff across the country.  And I’ve seen already how this model brings about tangible social change.

What do you enjoy most about your work?

I’m incredibly lucky to be able to make a living by “fighting the good fight.”  Many high-achieving recent grads are in jobs where they could care less about their employers’ productivity.  They might value their jobs for professional development or networking, but not for much beyond that.  Having spent half a year with the Student PIRGs, I know now that finding one’s work intrinsically valuable is not something to be compromised on–not something to be postponed until later.  A deep respect for the organization and its mission has made this year particularly satisfying.

What is the most challenging aspect of your job?

The most challenging part, and also the most rewarding part and the purpose of my job, is politicizing college students and inspiring them to take action on our campaigns.  The culture of activism at Salem State isn’t as robust as at Wesleyan.  Here, PIRG is the longest standing and most fruitful student group on campus–so my charge is to make sure students know that if they want something fixed, it starts with them.  College students have been at the forefront of virtually every social movement in recent history, but inspiring students to “be the change” can be really tough.  I know I wasn’t as active as I could have been in college.

Have you learned anything surprising about campaign work or, more broadly, what it takes to work for social change?

This job has opened my eyes to the degree of corruption in U.S. politics.  PIRG’s motto is “We stand up to powerful special interests;” so all of our campaigns are designed around issues in which a special interest group (representing the fossil fuel industry, for example) is exploiting the public in an effort to maximize profits.  We are up against absolute giants–corporations and lobbies worth billions of dollars.  In turn, the only way to effect change is with vast public support.  Before this job, I didn’t really know what an organizer did; now it’s clear that recruiting and training good organizers is the only chance we have.