Wesleyan University’s College of the Environment in partnership with the Center for the Arts, The Connecticut River Coastal Conservation District, Middlesex Community College Environmental Science Program, and The Rockfall Foundation is excited to announce a new environmental documentary film series, The Elements: An Annual Environmental Film Series, starting this spring. 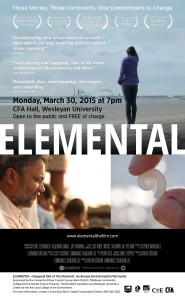 Our first film, Elemental, will be screened on Monday, March 30, 2015 at 7:00 pm at the Center for the Arts (CFA) Hall, 287 Washington Terrace on the campus of Wesleyan University in Middletown. The screenings are open to the public and free of charge.

Highly acclaimed and much awarded, Elemental tells the inspiring stories of three activists’ efforts to protect air, water and earth around the world, a sort of call for global action. In the film we meet “Rajendra Singh, an Indian government official gone rogue, on a 40-day pilgrimage down India’s once pristine Ganges River, now polluted and dying;”  Eriel Deranger in northern Canada, “campaigning tirelessly against the Tar Sands and its proposed 2,000 mile Keystone XL Pipeline, which are destroying Indigenous communities and threatening an entire continent;” and Jay Harman, Australian inventor and entrepreneur, who “searches for investors willing to risk millions on his conviction that nature’s own systems hold the key to our world’s ecological problems, and has created a revolutionary device that he believes can slow down global warming, but will it work?”