The Patricelli Center for Social Entrepreneurship awards annual seed grants to fund the launch or early stage growth of a Wesleyan-connected social enterprise, project, program, or venture. Each grantee reports back with blog posts and photos. Here’s the second report from Rachel Verner ’15, founder of Assk, a company that strives to normalize sexual consent through apparel and education, thereby preventing sexual violence. You can read Rachel’s first report and a description of Assk here, and you can read other grantee reports here. 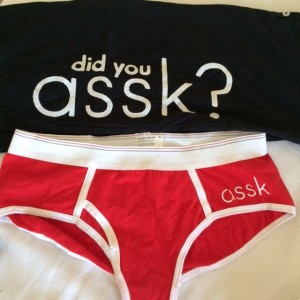 Assk Apparel samples. With the PCSE Seed grant, Rachel will formally launch Assk (under a new name) outside the Wesleyan campus, continuing her mission to “tackle sexual violence by normalizing consent.”

Since writing the last blog post in June, I’ve embarked on an incredibly unexpected adventure. I managed to secure a job, meaning that I’m legally allowed to stay in the country for at least another 8 months. My fortune in securing that job was, in large part, due to Makaela Kingsley, the Director of Wesleyan’s Patricelli Center. My visa restricts me to work related to my major, which I interpreted to mean doing research at a hospital or university, but Makaela hooked me up with an incredible Cambridge-based start up. I’m now doing neuroscience and psychology research, and cannot imagine a better fit, or a better learning environment. Makaela helped me do what seemed impossible: pursue my love for neuropsychology and my love for entrepreneurship at the same time. Unfortunately, the process of securing that job and getting set up in a new city has completely sidelined my efforts with Assk (as evident by this month-and-a-half-late blog post). My big task now is getting back on track. It’s time for another set of “To do’s”:

There’s another apparel company called ASSK. They’re based in Paris, so I was hoping it wouldn’t be an issue, but after talking to a handful of advisers and lawyers, I’ve been successfully convinced that moving forwards with the name Assk is a bad idea. I’ve been using that reality as an excuse to not work on the business. If I don’t have a name, how am I supposed to make a website? How am I supposed to sell clothing? I was so obsessed with the name Assk that I felt like we wouldn’t be able to succeed without it. Assk encapsulated the brand – it promoted sexual consent while breaking down all gender roles and stereotypes. But the reality is, particularly right now, the name doesn’t matter – and that’s not a realization I came to on my own. I received some great advice from a co-worker who didn’t even realize he was giving it to me. He told me that one of the two main reasons start-ups fail is because they take too long to make a decision. He said it didn’t matter if you made the wrong decision, so long as you made a decision and tried your way down that path. That’s what we need to do. We need to pick a name and run with it. Who cares if we change it for something better later, so long as we give ourselves a place to start. Yes, rebranding will pose its own challenges – but those aren’t challenges we’ll have the opportunity to face unless we start somewhere.

This has been obvious from day one.  While I was at Wesleyan, I tried to build a team around myself, but sadly, graduating has seen that team fall apart. I need to find some folks in Boston who are eager to apply creative solutions to social problems. I need to find people to help hold me accountable. I need to find people who want to shift this culture as badly as I do. I’ve been obsessed with finding the best and brightest, but the reality is, none of us have any idea what we’re doing. I just need people that are as motivated as I am, so that we can fumble our way through this together.

It’s time to hold myself accountable. Here’s hoping that publishing an ambitious timeline will help me do that.

And with that, I’ve got a lot of work to do.