The Effects of Eviction on People in Middlesex County

On Tuesday, a small group of students from the Community Research Seminar, Rilwan Babajide, Elly Blum, Hannah Maniates, and Madeline Scher, presented their work to community partners, faculty, staff, and students. Their presentation, titled “The Effects of Eviction on People in Middlesex County,” was based on qualitative data from semi-structured interviews with 28 Middlesex County residents who had experienced eviction. Their research was done in partnership with the Middlesex County Coalition on Housing and Homelessness, and supported by Program Coordinator Ann Faust. The research was intended to explore the effects of an eviction on all aspects of an individual’s life. In addition to Ann’s help, three community partners supported the students in finding evictees to interview; St. Vincent de Paul Soup Kitchen, Middlesex County Court, and the Amazing Grace Food Pantry.

The team presented 8 recurring themes that they found through their interviews. These were loss of agency, effects on future housing, material costs, employment, effects on families, mental health, physical health, and resilience. They found that many of these themes were intertwined. For example, a family that lost their home might have their children taken away and placed in temporary DCF custody, which greatly affected the parents’ mental health, and therefore their employment. This cascading effect was a common thread in many stories. 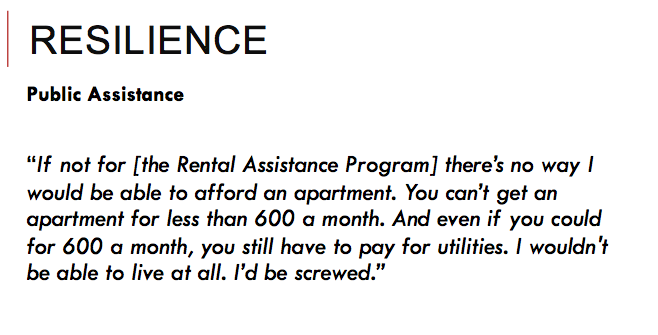 In almost all cases, the effects of eviction were negative, but the team pulled out a few contradictory threads. For example, while discussing the “effects on future housing,” they explained that many evictees ended up homeless, but some were able to qualify for assistance programs and found higher quality housing than they had before. They ended the presentation on this hopeful note- the individuals who were lucky enough to access support services after being evicted were able to recover from the eviction. 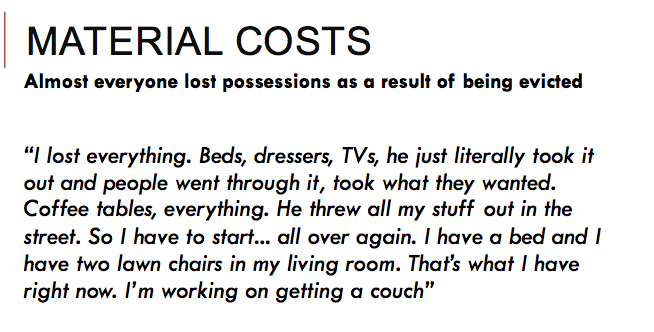 At the end of the presentation, the students opened up the room for questions. One attendee asked, “What would you say to a landlord who hasn’t been receiving rent and decides to evict their tenants?” The students explained that only 1/4 of evictions happen formally through the courts. More than double that number happen informally. Some families described being kicked out, or locked out of their apartment because the landlord didn’t like their children. Others were evicted by the bank after their landlord’s building was foreclosed.

Another attendee asked what the students found most surprising in their research. The presenters shared surprises, such as interviewing college graduates, which changed their perception of homelessness and eviction, or seeing how far-reaching the effects of eviction could be on someone’s familial relationships, employment, material possessions, financial stability, and health.