Crystal Feimster and Demetrius Eudell will discuss the historical significance of confederate monuments and the campaigns for their removal in New Orleans, North Carolina, Baltimore, and elsewhere. 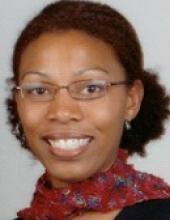 Crystal Feimster, (Ph.D., Princeton University, 2000), is Associate Professor of African American Studies, History and American Studies at Yale University. Feimster’s academic focus is racial and sexual violence; currently, she is completing a project on rape during the American Civil War. Her book, Southern Horrors: Women and the Politics of Rape and Lynching, focuses on two women journalists, Ida B. Wells, who campaigned against lynching, and Rebecca Latimer Felton, who urged white men to prove their manhood by lynching black men accused of raping white women.

Demetrius L. Eudell is Professor of History at Wesleyan University, where he specializes in 19th-century U.S. history, intellectual history, and the history of Blacks in the Americas. In addition to a number of essays and articles on Black intellectual and cultural history, he is the also the author of The Political Languages of Emancipation in the British Caribbean and the U.S. South and co-editor with Carolyn Allen of Sylvia Wynter: A Transculturalist Rethinking Modernity, a special issue of The Journal of West Indian Literature. His current research projects include an exploration of the interconnections of the discourses of hierarchy of race and caste as well as an examination of the role of ideas of history, nature, and human differences in the 18th-century Enlightenment with special reference to the German Aufklärung.

September 27, 7:30 pm, Memorial Chapel
Free and open to the public 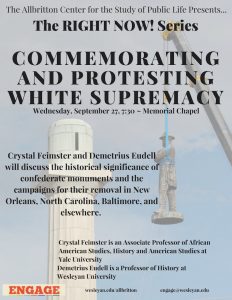