Samantha Sheppe was selected to receive a Conference Grant from the Patricelli Center for Social Entrepreneurship. With this grant, she traveled to Orlando,FL to participate in the Grace Hopper Celebration. You can read Samantha’s reflection below, read past grantee reflections here, and visit the PCSE website to learn more about all of our grant programs. 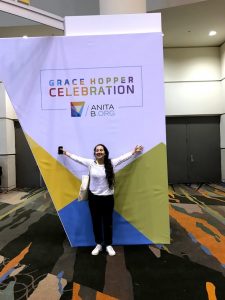 My time at GHC was a whirlwind. At Wesleyan, it’s hard not to feel alone in a room when being taught by a man and while surrounded by men. Grace Hopper amazed me. I was one of 18,000 women attending. I was surrounded by powerful women working to make a difference in the world, supporting other women throughout their experiences.

Before I arrived at the conference, I entered my resume into a database in hopes of a job. Within weeks I had more emails than anticipated, ranging from companies I had never heard of to big names like Disney and Google. What followed the next month was overwhelming stress and excitement. Nearly every day I had one to two informational interviews, often back to back. As I rushed from my on-campus jobs to class I couldn’t believe the luck I was having — I might actually get a job through Grace Hopper. By the end of my calls, I had lined up three interviews at the conference, all on day one.

Day one began early with a keynote lecture from Dr. Fei-Fei Li, an immigrant working in A.I. Melinda Gates spoke next about diversity, followed by Dr. Sue Black OBE, who founded a support system for mothers in tech. Before the end of the keynote, I had to leave in order to get to my first interview. I rushed through my first interview at company A, leaving early to get to my second at company B while embarrassingly apologizing to my very confused interviewers. Around lunch I got a call to do a second interview the following day, with company B. I finished off my day interviewing with company C, and perused the job fair looking for more interesting companies to try and interview with. (Part of the “game” of Grace Hopper that I had learned is you might go in with interviews, but people are just as willing to give them out on the spot. “Print 50 resumes,” I was told, “Wear business casual”.) 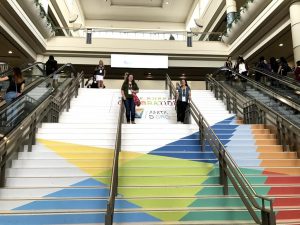 Day two followed in the same fashion. The early morning keynote lectures were both inspiring and heartbreaking. Mary Spio spoke about getting fired for being pregnant and Debbie Sterling encouraged everyone in the room to be okay with our failures. I spent most of the morning prepping for (and freaking out about) my interview. After the two hour process, I finally took a deep breath and decided to take advantage of every free item being passed out at the job hall: shirts, pens, notepads, portable chargers, 3D printed candy faces, tote bags, and stickers. My friends and I made our rounds, searching for the best items and trying to get as much as we could fit in the new bags we had acquired. Two of my friends from abroad had interned at Google the previous summer, and I was invited to go to the Google Intern event at Epcot that evening. Google rented out the park, and after they fed us we had a few hours with the park to ourselves. It was awesome. 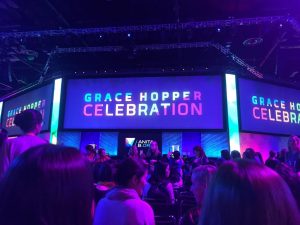 By day three, I was exhausted. Job interviews were over and my time with my friends from abroad was coming to an end. We attended a data talk presented by a woman from Yelp, with a project that helped predict the likeliness of a user to rate a restaurant five stars based on their previous ratings. In the afternoon, we attended a panel hosted by women from Microsoft, Intel, Facebook and Google. Each spoke about what their company was doing in terms of virtual reality. 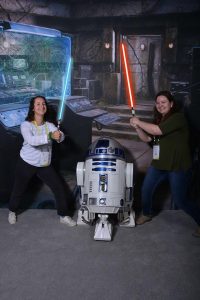 Looking back, I could not be more appreciative of my time at Grace Hopper — it started my interview process in September and ultimately got me a job at Google. I was able to catch up with some of my best friends, and most importantly I was given the chance to be surrounded by thousands of women I could relate to and be inspired by. Coming back to Wesleyan, I was shocked that most female-identifying computer science students at Wesleyan are not aware of this incredible opportunity. And for those who are, it’s nearly impossible to raise the money to attend. I truly hope that we are able to do something to provide more women with this opportunity.