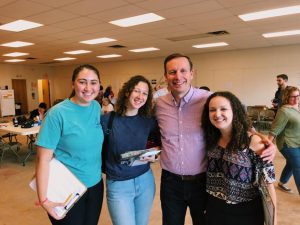 Mika (2nd to left) with Chris Murphy and two other volunteers

Campaigning for Matt Lesser for CT State Senate was a great experience. This was my first time working on a political campaign and I learned a lot. Going door to door in the Middletown area showed me what political organizing looks like on the ground, and it has been fascinating listening to voters about their political beliefs and issues they care about. It’s been especially constructive to engage with voters who I disagree with. I’ve learned that at some point it’s better to just listen, because even if I don’t convince them, the fact that someone came and asked them about their views will stay with them, and contributes to a healthy democracy.

I originally wanted to get involved in the campaign because I’m at a time in my life when I’m thinking about my future and what I want to do after graduation. Working on a political campaign seemed like a good way to both make a difference and get exposed to a field I may want to work in after college. I also truly believe in Matt’s policy positions and want to contribute towards a more progressive Connecticut. Overall, campaigning for Matt has been a highly rewarding, educational experience and I would highly encourage anyone interested in the field of politics to give it a try. An important thing to keep in mind about volunteering for a campaign is that you don’t have to commit to working on the whole campaign to get involved; campaigns often have canvassing events where residents are invited to knock on a couple doors. These events are great, low-commitment ways to get exposed to political organizing.