Notes from Engage Today: Bridging the Ballot and the Block

On Saturday, October 27th the Jewett Center for Community Partnerships hosted Engage Today: Bridging the Ballot and the Block – a half-day long conference designed to continue a dialogue between Wesleyan students and community partners interested in supporting voter registration efforts, while also exploring potential points of collaborations for engaging folks beyond this election cycle. 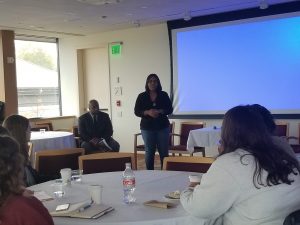 Eva Bermudez Zimmerman: “Let’s try to meet each other on a human level…tap into an issue that you’re passionate about…and that’s how we can make change.”

We welcomed an esteemed panel – which included Wildaliz Bermudez (member of the Hartford City Council), Eva Bermudez Zimmerman (former Democratic candidate for CT Lt. Governor), Lorenzo Jones, (Co-Founder of the Katal Center for Health, Justice, and Equity) and Jeremy Stein (Executive Director of Connecticut Against Gun Violence). Panelists discussed their current work and shared insights from their personal journeys as organizers, political activists, and elected officials. Wesleyan student recipients of our Student Political Engagement Fund grants and other politically active students – fresh from their work on campaigns here in CT and around the country –  also shared their experiences with an audience of 30 plus gathered for the better part of a blustery Saturday. Sophie Elwood, Maya Gomberg, Katie Shewfelt, and Austin Pope spoke about what it was like working for a campaign as a college student, as well as the difficulties motivating other college students to get involved. There was general consensus that money (such as the Student Political Engagement Fund) could be a motivator, but so was feeling respected and valued by the campaign team. Read more Political Engagement Fund Reports here. 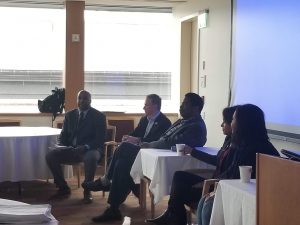 Panelists, students, and members of the audience alike noted the importance of wide community participation in the upcoming elections and have committed a great deal of energy and resources to do so.  All in attendance also underscored that the work of creating space for open dialogue, opportunities for leadership development, and encouraging all members of our community to see themselves as changemakers  – between election cycles – is critical to ensuring that more participate in electoral politics. The Jewett Center team is committed to supporting such work in collaboration with community partners.