Each year, the Patricelli Center for Social Entrepreneurship awards $5,000 seed grants to fund the launch or early-stage growth of a project, program, or venture. Downstream Podcasting run by Alli Fam ’19 was one of this year’s winners. This is their first report since receiving funding from the PCSE in March 2019.

Since receiving the Seed Grant in March, Downstream Podcasting has facilitated podcast training workshops for underrepresented voices at Yale, University of Vermont and a Middletown Community Center. Downstream has purchased new podcasting equipment such as: microphones, hand recorders and editing software for workshops and podcast production. Recently, trained students and staff have been hard at work producing the first few episodes of Downstream’s podcast series Act Local, Be Vocal. The show is slated to premiere in July. Downstream has nine new student podcasters working on Act Local, Be Vocal, all of whom are being compensated for their work. Students are fulfilling a variety of roles on a podcast team such as host, editor, producer, and marketing.

Downstream’s podcasting workshops have proved successful and been well received by trainees. Students in the Arab Students Association at Yale who had never produced a podcast before the training, are now working together to produce an episode for Act Local, Be Vocal featuring the organization New Havenly, with which many of them are involved.  New Havenly is a bakery that offers fellowships and employment to refugee women. Students trained at the Downstream workshop at University of Vermont are working together to produce two episodes for Act Local, Be Vocal. Both will feature local Burlington non-profits. High school students in Middletown are excited to use the podcasting skills they acquired at the workshop to produce their own series about political events and issues in their community. Although Downstream did not achieve its own goal of five podcasting workshops by May 15th, the three workshops it gave were enthusiastically attended and Downstream has already planned two workshops at the New Haven LGBTQ center this fall. 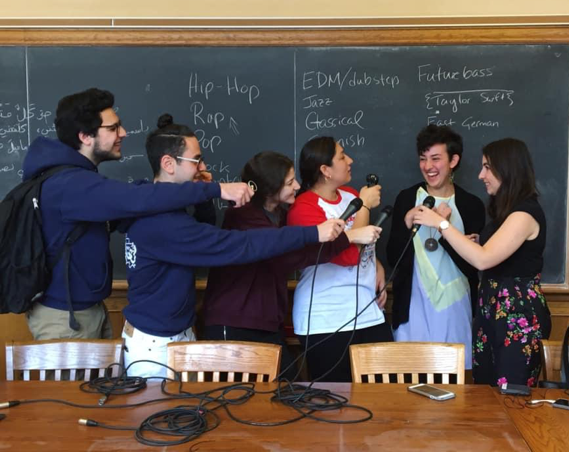 Although the business model for Downstream has been working, convincing university student groups to book Downstream has proved challenging. This challenge was in part due to Downstream reaching out to schools too late in the academic year for student groups to secure funding, which Downstream hopes to remedy by reaching out to students this summer and next fall. But it also has become clear, that many students are less interested in booking a workshop when universities already offer so many activities and speakers for students. Downstream has now realized that another market for workshops are libraries and community centers, an exciting new opportunity. Giving workshops at community centers and libraries also makes Downstream more accessible to a greater population of folks such as adults, children and non-college students. For example, one of the scheduled fall workshops is specifically for LGBTQ adults. While there isn’t as much money to be made in these workshops, the centers have proved much more enthusiastic and easier to coordinate with than universities, and provide a great workshop supplement to Downstream’s original business model while expanding its reach.

Downstream is excited to develop its website, continue working on the show and planning more workshops this summer!

Thank you for your support.