Women in Hip-Hop, Contemporary Black Culture, and the Role of College Radio

Akua Naru will share her music and speak on “Women in Hip-Hop, Contemporary Black Culture, and the Role of College Radio.” 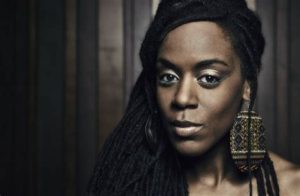 Independent artist and founder of The Keeper Project – a multi-media archive which chronicles the role of women in the creation and evolution of hip-hop music and culture – Akua Naru was awarded the prestigious Nasir Jones Fellowship at Harvard University and is currently an artist-in-residence at Brown University.

Since her 2011 debut, The Journey Aflame, she has released 2 studio albums; The Miner’s Canary (2015), and the Blackest Joy (2017), and a live Recording: Live and Aflame Sessions (2012). She has performed in more than fifty countries and has become a highly sought lecturer.

Please join us in learning more about Akua Naru’s music and artistic inspirations.