The Fault Lines of Evangelicalism: Donald Trump, Christianity Today, and the History of a Movement

The Fault Lines of Evangelicalism: Donald Trump, Christianity Today, and the History of a Movement

Every election cycle evangelicals are an influential group to be reckoned with for journalists, pundits, politicians, and political strategists. Under President Donald J. Trump, their political power is reflected by increased White House access, and appointments of evangelicals to administrative and cabinet-level positions. And yet, as the furor created by the Christianity Today editorial (December 19, 2019) calling for the President’s removal from office demonstrates, evangelicalism is a diverse community and a movement that may be showing signs of fracture. This lecture will explore the recent history of evangelicalism, discussing the roles gender, race, and science played in its creation and what the Christianity Today editorial means for the movement going forward. 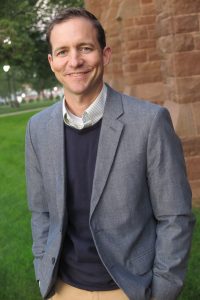 Joseph P. Slaughter (Ph.D., University of Maryland, College Park) is Visiting Assistant Professor of History and Chamberlain Project Fellow in the Allbritton Center for the Study of Public Life at Wesleyan University where he researches and teaches courses in American religion, capitalism, and war. Slaughter specializes in demonstrating how religious identities of Americans from the colonial period through the first half of the nineteenth century shaped their decisions in the marketplace and on the battlefield.  His current book project, Faith in Markets: Christian Capitalism in the Early Republic (Columbia University Press) examines how religious businesses helped create the American marketplace in the Early National Period U. S. Prior to arriving at Wesleyan University, he served as a Navy C-2A Greyhound pilot before spending nine years as a Permanent Military Instructor in the Naval Academy Department of History where he taught courses on early America and surveys of premodern and modern world history. 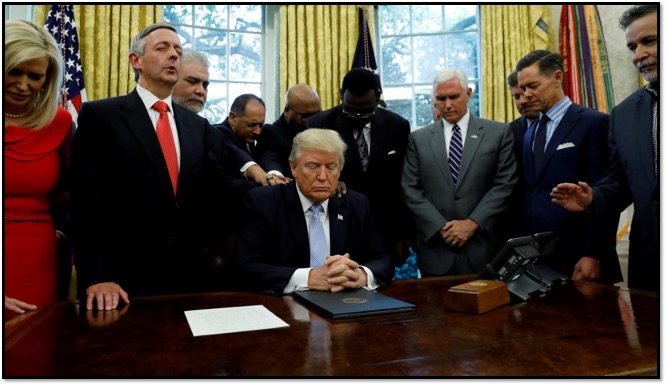 President Trump’s evangelical supporters pray with him in the Oval Office during the Sept 1, 2017 signing of a National Day of Prayer (Sept 3, 2017) for Texas/Louisiana after Hurricane Harvey.