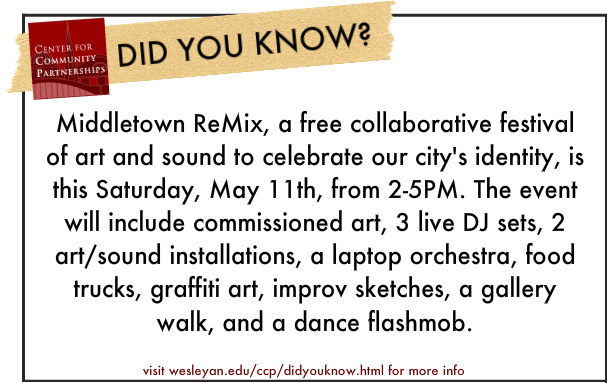 It’s the last fact of the Did You Know? series! Why not go out with a festival?

This Saturday, from 2-5PM, the Middletown ReMix Festival will take place all over our city. This free event (rain or shine) has a host of activities. To find out more visit the Middletown ReMix website, and on the day of the festival, you can head to the Information Center in front of It’s Only Natural Market, 575 Main Street. You can also enter to win festival prizes at each station!

Listen to Middletown DJs remix the sounds of Middletown. The master of ceremonies DJ Arun Ranganathan, and Wesleyan student DJs Coral Foxworth ’15 and William Brewster Lee ’13, performs their remixes commissioned for the festival.

Walk into a 16′ X 8′ “camera,” created by Middletown artists Joe McCarthy and Peter Albano and commissioned for the festival. The environment inside this installation “recomposes” the sights and sounds of the festival, leaving you with the notion that your perspective of the world is powerfully influenced by the lens through which you choose to view it.

Experience Lighthouse, beside the point, a world premiere sound installation by Wesleyan University Professor of Music Ronald Kuivila commissioned for the festival, in the beautiful glass pavilion atop the Community Health Center. Listen to the sounds of Middletown while seeing the city from an entirely different angle.

View the “Hear More, See More Photography Exhibition,” curated by Carolyn Reeves, President of the MAC 650 Artist Coop, as part of the North End Gallery Walk. The photographic tribute to Middletown features images from novices to professionals, and shows a variety of shots of the city.

Immerse yourself in David Tudor’s Rainforest IV (1973), reconstructed by Wesleyan University music students under the direction of University Professor of Music Ronald Kuivila – an environment filled with found objects transformed into loudspeakers.

Hear the world premiere of MTRX (2012) by Jason Freeman of UrbanRemix, commissioned for the festival and performed by Wesleyan University’s Toneburst Laptop & Electronic Arts Ensemble, directed by Assistant Professor of Music Paula Matthusen, at 2pm, 3pm and 4pm. View the Green Street Arts Center’s year-end exhibition of works created by afterschool students as part of the North End Gallery Walk.

View an exhibit related to the sounds of Middletown as part of the North End Gallery Walk.

Surround yourself with video, animation and MiddletownRemix sounds in a temporary, site-specific installation created by Middletown resident Marc Pettersen in conjunction with animation artist Cheryl Elliott and DJ and video artist Matt Weston, and commissioned for the festival using multiple projectors, mirrors and speakers.

View work from the Middletown Art Guild as part of the North End Gallery Walk.

Don’t miss a flash mob dance at 2:30pm, choreographed by Wesleyan student Kelsey Siegel ’13, performed to a hip-hop soundtrack created by DJ Arun Ranganathan incorporating sounds from MiddletownRemix. Learn the dance by watching the video, then and come perform on Saturday, May 11! (Meet at 2pm in front of It’s Only Natural Market at 575 Main Street in Middletown, CT).