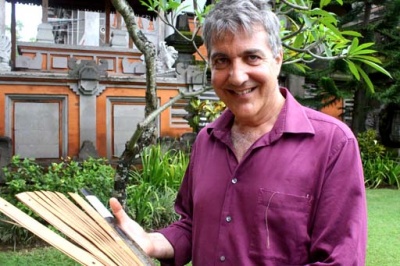 Professor of Theater Ron Jenkins wrote to us describing the progression of his work on a collaborative prison theater education project that has brought him from Wesleyan, to Italy, and finally to Indonesia:

I spent a week in Pesaro, Italy working with Professor Vito Minoia of the University of Urbino on theater prison workshops. This collaboration led to our plan to apply for future funding to facilitate a prison theater project that will use performance to explore the issue of religious practices in prisons for incarcerated individuals of various faiths. An important innovation in this project is the involvement of prison correction officers in an effort to transform the overall culture of the prison community through collaborative engagement in theater, Professor Minoia and I observed how prison culture actually has been transformed by theater in other prisons where theaters have been operating for years including the prison in Volterra, Italy and a prison community in Montecerignone where prisoners with mental illness regularly create and perform theater pieces alongside psychiatrists, staff, and educators as equal participants.

I also spent a week in Florence hosted by the Robert F Kennedy Center for Human Rights visiting prisons, state prison authorities, and architects of progressive prison environments. As a result of these meetings the RFK center has invited me to return next year to conduct prison theater workshops with professor Minoia on the theme of social justice. These workshops will involve the collaboration of several different social service community groups in Florence.

I was recently in Indonesia where I have been invited by the Indonesian journalist and activist Rita Widiadana  to create a documentary theater piece based on the interviews she is conducting with the victims of human trafficking in Indonesia and Pakistan in collaboration with a Pakistani documentary film maker, Malik Ayub Sumbal. As part of our collaboration I attended an international conference on trafficking here in Indonesia sponsored by USAID and the ASEAN Human Rights Council.  I am also helping Ms. Widiadana to conduct interviews here with trafficking victims.  Ms. Widiadan, Mr. Sumbal and I are applying to USAID for support of our future work together.