From October 8th to October 10th Wesleyan was graced with award-winning actor, writer, mentor, activist, and kind soul, Daniel Beaty. During his short time at Wesleyan, Daniel hosted two workshops for Wesleyan students, an open mic, and performed his one man show “Mr. Joy.”  He concluded his stay at Wesleyan by hosting a social justice based workshop for the greater Middletown community. 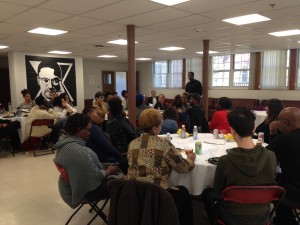 Daniel stressed the importance of personal narrative and using trauma and subsequent wounds as a driving force for change, bringing his artistic perspective to broader conversations of social change. Wesleyan students, professors, and faculty as well as Middletown community members and leaders attended Daniel’s Saturday workshops. Each table was able to choose a topic of discussion all surrounding different issues such as institutionalized racism, violence against lgbtq community, generational gaps in social movements, etc. Each table was able to share what they discussed about their own topics and dialogue naturally sprung from these smaller conversations. After every question had been discussed, a writing prompt was provided to insight conversations about communal violence and trauma and inspire a more hopeful outlook for the future.

As a senior, I would argue that my encounter with Daniel, the first writing/poetry workshop, was one of the most transformative moments I’ve had during my time at Wesleyan. The notion that wounds are the impetus for positive change and possibility was something that I had never thought possible. Wounds leave scars and those scars carry the memory of trauma that often times, we do not want to relive.  If I had been told that the workshop was going to be as open and honest  as it had been I would not have believed it. Here we were in X-House basement, virtually strangers to one another, as we did not know the intimate details of each other’s lives, and Daniel completely broke down our reservations.  We bared our traumas, pains, and hurts to one another and in the center of our cacophony of emotions there was an overwhelming amount of love.  I felt lighter after the workshop and I realized that in order to fathom our futures and remain present in our daily lives that we must hold our pasts, as painful as the memories may be, and never forget them.  They are the things that have brought us to where we are today and are the driving forces in our futures. 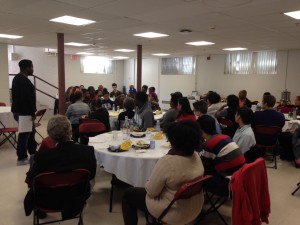 Both Daniel’s poetry workshop and social justice and self-care workshop left me feeling inspired and empowered. I appreciated Daniel’s ability to establish a safe place that encouraged honesty and vulnerability. Daniel explained the role that pain has played in his own personal growth and how we should all be able to use our wounds as fuel for our passions or fuel for personal growth. I was not only able to reflect on my personal wounds and how they affect me currently, but I was also able to reflect on collective and historical wounds that affect larger groups of people. I was then able to pose the questions “how can marginalized groups of people use their wounds as fuel for positive change and creating a better future? What would that even look like?”

We were so fortunate to have Daniel Beaty visit Wesleyan and we hope that he will return soon!