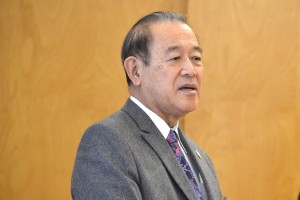 On October 13, Wesleyan hosted a visit from the former Japanese Ambassador to the United States, Ichiro Fujisaki, as part of a goodwill mission Ambassador Fujisaki and a panel of experts are bringing to colleges and in public talks. The purpose of the program, “Walk in the US, Talk on Japan,” is to promote a strong relationship between the United States and Japan to US citizens.

The timing of the talk fell between two important policy decisions: the approval of the Trans-Pacific Partnership, in which both the US and Japan are both signatories, and changes in Japan’s security laws, which will expand Japan’s capacity to send its troops abroad.

On the panel, Fujisaki spoke with Keizo Iijima of Thomson Reuters and the Bank of Toyko, Akiko Takahashi of Nomura Holdings, Mai Iida of the University of Tokyo Graduate School of Public Policy, and Haruko Yuda who works in the president’s office of ISA Co. LTD. Iijima talked about Abenomis, an economic policy being promoted by Prime Minister Abe. Takahashi spoke about issues of healthcare and retirement savings related to Japan’s aging populations. Iida researches domestic migration, and shared her comments on disaster prevention and reconstruction. Yuda spoke about Japan’s education policy as one of the most literate countries in the world. 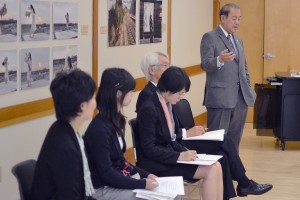 Fujisaki was the standing Ambassador to the United States during the 2011 earthquake, tsunami and Fukushima nuclear meltdown. Professor Haddad, one of the organizers of the panel, reported:

“Ambassador Fujisaki said in his remarks that after the triple disaster in Japan there was a massive U.S. assistance program called Operation Tomodachi, which translates to “Operation Friends.” It was the most highly coordinated civil military operation in the world. Fujisaki remembered the outpouring of friendship and connection from US citizens to Japanese disaster victims right after the disaster and wanted to renew those connections between our countries.” 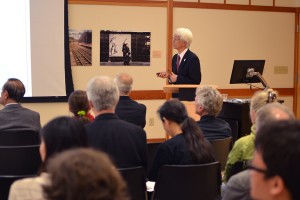 After each of the panelists spoke, the floor was opened up for questions. Many members of the audience were Japanese students who brought a more comprehensive understanding of the context of the conversation. To the former Ambassador and the panel, this series of talks was about creating a positive image of Japan to U.S. students, but to many Japanese students studying abroad, it was seen as an opportunity to ask questions of and express concerns to their government. Kotaro Aoki ‘ 16 shared his reflections on the presentation:

“Mr. Fujisaki told the audience that, with the collective self-defense right, Japan is now able to fight for the world’s peace in cooperation with the US. No hesitation- Mr. Fujisaki’s smile was full of confidence. I could not stop myself from asking him what he thought of the people’s resistance to the legislation, and whether it was democratic for the government / cabinet to decide the nation’s constitutional essentials without getting agreement from the people. “

After the Ambassador and his delegation departed many of the students remained to discuss what was going on. Professor Haddad asked them what they thought about the panel, and they responded, “We’re so angry! We feel like this government is throwing away our Constitution!” 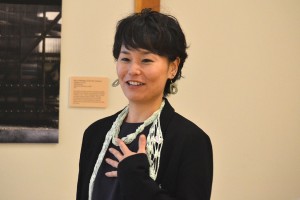 Hearing native Japanese students’ perspectives on the policy changes in Japan created a much broader dialogue that showed the diversity of opinions around these issues, instead of portraying the country as having a unified political front. Their recollections of protests around the security laws and their historical sense for the importance of these legal changes were very valuable. While the Ambassador’s perspective of the need for Japan to play a great role in international security and be a more equal partner in the US-Japan Alliance makes sense, the perspective of the native Japanese helped American students understand the richness of the current political landscape in Japan, and realize how the current political debates touch on core ideas of Japanese identity.

Earlier that day, Fujisaki and his panel did the same presentation at Trinity College through the Center for Urban and Global Studies. They met with students at Yale the next day as the tour continued.

This talk was co-sponsored the Allbritton Center for the Study of Public Life and the College of East Asian Studies.

Photography by Will Barr ‘18