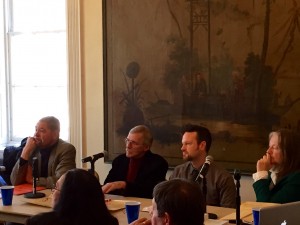 Lucianne Lavin, Ph.D. – Director of Research and Collections at the Institute for American Indian Studies and author of Connecticut’s Indigenous Peoples 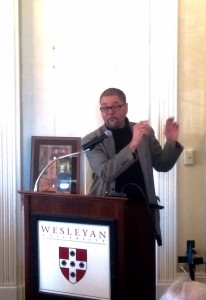 Reginald W. Bacon – Editor of The Middler, the newsletter of the Society ofMiddletown First Settlers Descendants

Gary O’Neil – Descendant of Jonathan Palmer and genealogist of the remaining Wangunks in the Middlesex County, organizer and leader of the Wangunks since the 1970’s

The event was a resounding success, with over 90 in attendance and overflow seating in the stairwell. 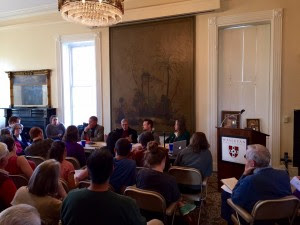 The gathering emerged from a service learning course, taught by Kauanui (Associate Professor of American Studies and Anthropology), called “Decolonizing Indigenous Middletown: Native Histories of the Wangunk Indian People,” which is in partnership with the Middlesex County Historical Society. In the course students have been learning about the field of settler colonial studies, the rapidly transforming field of critical indigenous studies, along with Native American history and historiography addressing southern New England. Taking up a decolonizing approach, the class focuses on the sparsely documented history of the Wangunk Indian Tribe, the indigenous people of the city of Middletown, also known as Mattabesett. The Wangunk people, part of the Algonquin cultural group, historically presided over both sides of the Connecticut River in present-day Middletown, Portland, and East Hampton, while their traditional territory reached as far north as Wethersfield and Chatham. The course explores both the erasure of their history and the history of their erasure. All semester, students have been conducting archival research at the Middlesex County Historical Society, participating in class field trips to the Mashantucket Pequot Museum and Research Center, the Indian Hill Cemetery, and Founders’ Rock. The culminating group project will be a wikipedia entry on the Wangunk people. Also, next semester, the group hopes to organize a campus-wide event to present their research findings to the broader community.