This summer I had the privilege of working towards one of my biggest dreams: with the help of Wesleyan’s Refugee Initiative, I got to collaborate with fellow Haitians at home to bring innovative solutions to some of the biggest problems our beloved Haiti faces. One of those major problems is the denationalization of Haitians and Dominicans of Haitian descent in the Dominican Republic (DR) following the enactment of a decree in June 2015, which led to mass migrations and deportations of families to Haiti. Border areas in Haiti bore the brunt of this crisis; numerous make-shift refugee camps soon sprang up along Haitian border towns, with several hundred families living at the mercy of the elements. 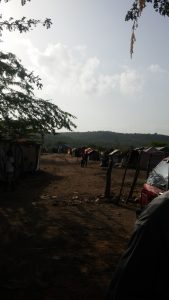 Parc-Cadeau Camps. Charcoal production is the only source of income for most families there.

One of the areas most affected by this crisis is Anse-à-Pitres (Ansapit in Creole), a small town on the southeastern coast of Haiti bordering Pedernales in the DR, where two camps emerged in the outskirts. I was following the denationalization crisis very closely during the summer and even strategized with some good friends about how we could contribute to response efforts. I had never heard of Ansapit until I came across this article on the New York Times highlighting the effects of the crisis on the already economically-burdened town. I was appalled by the deplorable living conditions portrayed in the article and decided that I was going to do something. I had no clue what I was going to do or how; I just knew I wanted to help in a responsible way.

Fast forward to March 2016. I finally had a plan for how I could make a positive and lasting impact in Ansapit, with $10,000 in grant funding at my disposal. After gathering information from several actors on the ground–I got in contact with the mayor’s office, a few grassroots organizations (GPLA, SocialTap, fishermen association) and a Ph.D. research student–I determined the best way to have that kind of impact was to bring an economic engine into the town by targeting the local fishing industry, the backbone of many coastal areas’ economy in Haiti. Hoping to capitalize on the need for a local supply of ice­­, I contemplated the idea of bringing a solar-powered ice maker to generate crucial funds for efforts aimed at rehabilitating the displaced families. The sustainability of this initiative made it a viable contender; it would benefit both the displaced families in the camps and the local community of Ansapit through various direct and indirect effects, such as access to some basic necessities, job creation, and health improvements (the ice currently sold there is made with untreated/undrinkable water). 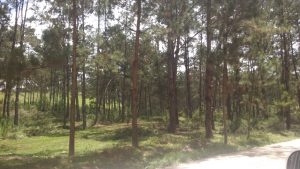 Forêt des Pins (Pine Forest), on the way to Ansapit. One of the highest points in Haiti; it was 60 degrees when we were there.

Equipped with the financial power to execute my initiative, I got in contact with a social entrepreneur and a solar energy expert. By May, we were figuring out how to create a design for our own solar ice-maker prototype using local materials and input from local actors, like the fishermen. I purchased a one-way ticket and in early June, flew to Haiti ready to devote my entire summer to see this initiative come to life.

Despite my initial optimism about the project, I soon learned that things never go as planned. After a month in Haiti, I had to rethink my whole project design: the social entrepreneur and the engineer told me they were going to be busy with their professional lives and won’t really be able to help me until the end of the summer. At that point, everything seemed to come crashing down all at once. What was I going to tell Wesleyan? And all the people in Ansapit I had told about the project during my first trip there? 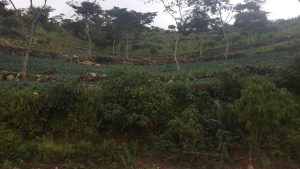 Cabbage field on the way to Ansapit. The south of Haiti is home to some of the most fertile soil in the country.

My first time in Ansapit put a lot of things in perspective for me. It took 8 brutal hours from the capital to reach Ansapit, traveling through some of the most treacherous corners and also some of most beautiful places in the country. Throughout my stay, I noticed that different realities were odds with one another: fertile and barren lands just a few kilometers apart; radio stations and just about anything else in Ansapit being Dominican; the naked mountain tops surrounding Ansapit and the lush landscape in Pedernales. Nevertheless, the resilience and ingenuity of the people of Ansapit stuck out to me. In spite of being almost completely forsaken by the Haitian government, they take matters into their own hands and create a livelihood for their families by whatever means necessary. They have also taken several initiatives to improve their communities with the little resources they’ve had–GPLA helped bring a potable water system into the town. I could not just let this opportunity to have a real impact on the community slip away. 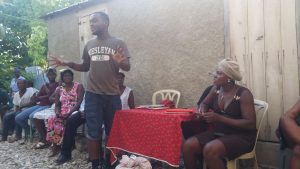 Knowing how much was at stake, I went back to the solar energy engineer and the social entrepreneur to ask for help once again. They obliged. As much as we had hoped to develop the ice-maker locally, I ended up needing to get all the parts from abroad. The engineer helped me design an off-grid solar system to power a pre-manufactured ice-maker from Turkey which was, fortunately, my plan B-since the very beginning, I researched companies that manufactured ice-makers just in case things went south.

At the beginning of August, I was frustrated with myself. Even though I was able to put a purchase order for most of the items that I need, I did not have something concrete to show for those two months in Haiti. 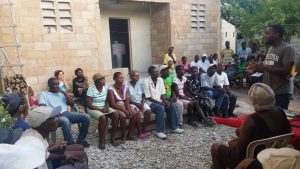 At a meeting organized by GPLA (Groupement pour L’avancement de L’Anse-à-Pites). Informing some community members about the Ice-Maker Initiative.

Furthermore, I now had major financial barriers. The entire $10,000 grant was allocated towards purchasing equipment: 6 high-end solar panels, a state of arch power bank, and the ice-maker itself. Then, I still needed to pay for shipment and other transportation costs to Haiti along with flight tickets, living expenses. In the end, the total cost of the project will be a lot more than I had anticipated, especially when accounting for the future expenses needed to finalize the project.

In spite of these setbacks, there were many positive aspects from this initial experience. Generous contributions from friends and family, combined with my personal savings, have provided much-needed additional financial backing. Although the timeline isn’t what I had originally planned, I successfully laid the groundwork to ensure that this initiative does not only last but also expands into something bigger in the future. I did a lot of community organizing, made some important connections, and got the support of many actors behind this initiative. For instance, I leveraged my connections with the mayor and local leaders to inform community members about the project and mobilize their support.

Even though I’m presently at Wesleyan, I stay in touch with these individuals to continue building on those important connections for the next stage of the project. 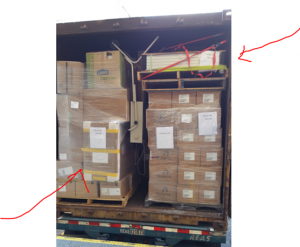 I could have written an entire book about my summer experience but I hope I have condensed enough in this report to give some context about my project. As of today, I have solar equipment aboard a ship on its way to Haiti. Build Health International, which has helped build many health facilities in Haiti, is shipping the equipment in their container. The ice-maker will be shipped from Turkey in early November. I plan to go back to Haiti during winter break to hopefully set up the solar system and have the ice-maker up and running. While the Ice-Maker Initiative is currently a pilot project, I envision that one day Ansapit will have its own ice plant that can provide enough ice for not only the community but also for other nearby areas; one can’t even begin to imagine all the resulting implications. There are still a few things I need to take care of to ensure that the final phase of the project go as smoothly as possible, but overall, I am very optimistic about this initiative. I could not have gotten this far without the support of friends and family and the awesome mentorship of the Patricelli Center for Social Entrepreneurship.

In light of the recent natural disasters in Haiti and the subsequent relief efforts, I hope that organizations and people who want to help do so in a responsible and meaningful way. We have to empower the populations we intend to serve by allowing them to have agency in the rebuilding process. Stay tuned for more updates on the project.

If you’d like to contribute to the cause, here’s a link to a gofundme page I started to help me cover some additional costs:  https://www.gofundme.com/icemaker