Ever seen a cool, interactive map that presents a lot of information really clearly, and wondered how someone created it? It was likely created using GIS, and students in Professor Kim Diver’s Introduction to GIS course (E&ES 324) learned how to create maps like those and much more during their course work this fall.

GIS stands for a geographic information system, and is simply a system that organizes, analyzes, and presents geographical or geospatial data. In Intro to GIS, students collaborate with a community partner to create a GIS and conduct data analysis and visualization related to the community partner’s objectives. The principle aim of the project is for students to gain applied GIS skills, while also working on a meaningful project for a local community partner.

Story map for the project on Long Lane Farm

All together, 17 undergraduate students worked on five different projects for community partners like the Middlesex Land Trust, the Moodus Reservoir Preservation Group, Long Lane Farm, and two separate projects with the City of Middletown. One master’s student also worked on a project related to her thesis concentration, without a community partnership, as part of the requirements for her master’s coursework in E&ES.

What kind of work were these students able to accomplish during one semester? For example, the group working with the Middlesex Land Trust was interested in analyzing the Sumner Brook Corridor, which runs through Middletown, Durham, and Haddam, and identifying properties that could be purchased and protected by the Land Trust. They used a weighted system of five different criteria to identify and map the most promising parcels of land for their community partner as sites to be preserved.

Throughout the presentations of the students’ final projects on Thursday, there was a strong vibe in the room that the students had fun. While their work may have been tedious or difficult at times, they enjoyed developing relationships and working with their community partners, learned a lot about GIS and its many applications, and truly liked the work they were doing. The community partners who attended the presentations also had grins from ear to ear while watching their students present — it was clear the work they put in was meaningful for the community partner, and that it was a mutually beneficial collaboration. 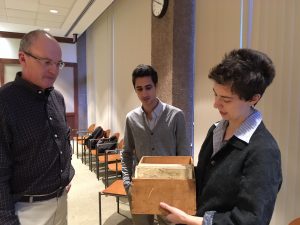 Louisa Winchell and Mat Shelley-Reade returning the box of 1922 aerial photographs used for their project to Roger Palmer (City of Middletown).

As an observer, I was impressed by the amount of skill these students had in GIS after one semester of introductory course work. Their presentations were clean, succinct and informative, and used some great tools to showcase their findings. For example, one group who worked on a project for the City of Middletown used a “spyglass” feature to overlay photos of 1920s Middletown over a map of Middletown today. As you scrolled across the map, you could see a snapshot of what Middletown looked like almost a century ago in contrast to its geographical features today.

Knowledge of the basics of GIS can be helpful on a variety of different projects across disciplines, and this course is a great way to learn those basics while also producing meaningful work for organizations in our community. Professor Diver is offering an Advanced GIS and Spatial Analyses course (E&ES334) this spring and plans to teach this introductory course again next fall. Congratulations to the students in the course on their wonderful final presentations!

*The Hartford Courant also wrote a story about the two City of Middletown projects.