Remember the “1 Year Out” series? Well, today we are launching a new series called “Reflections.” This series will feature guest posts by students involved at the Allbritton Center. They may be taking a service-learning class, engaged in community partnership work, DJ’ing at WESU, teaching at Green Street, pursuing the Civic Engagement Certificate, tutoring at the Center for Prison Education, working on a project/venture through the Patricelli Center, or some combination of the above and more. We believe that critical, real-time reflection enhances civic engagement work and promotes more robust learning. Want to contribute a reflection of your own? Contact Civic Engagement Fellow Rebecca Jacobsen ‘16.

Fall 2016 was a period of renewal for Kai Entrepreneurship, one of the student-run nonprofits I co-lead, and was also a new beginning with the start of my Patricelli Fellowship project on the future of transportation. 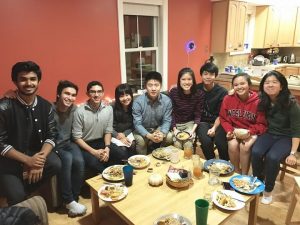 Some members of the Kai team at a team dinner. Missing Alvin, Duong, Vivian, Josh, and Marc.

At Kai we launched new programs, recruited new team members, created essential “apocalypse documents” that preserves our institutional memory, and began handing down the reigns to our younger team members. For my fellowship project I’ve taken notes on public transit from my study abroad in East Asia and travel in major U.S cities. I’ll start off with describing some of the concrete projects happening at Kai and then move onto my fellowship project.

One new program we tested this year was the Kai Mentorship program. The program was created by Mika Reyes and developed with Cindy Horng and Vivian Liu and paired six alumni with six students who applied through a competitive application process for a specific mentor. Wesleyan has often tried to create such a program, but it has been delayed countless years in the endless bureaucracy. As such, we promised to share our findings in this pilot with the school so they could learn from our mistakes and successes. The next round of the mentorship program will be announced this upcoming semester and be headed by new Kai member and mentorship program alumnae Saki Ohashi. 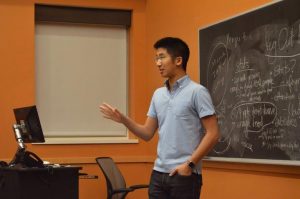 Older programs also continued this semester. The speaker series headed by Kai member Pi Paticha brought in the young and dynamic ad-tech entrepreneur Brian Wong. The event attracted around 35 students to the Olson Commons (formerly 41 Wyllys) to hear Mr. Wong speak. At the end of his funny and honest talk, Brian was also kind enough to hand out some free signed copies of his book, The Cheat Code: Going Off Script to Get More, Go Faster, and Shortcut Your Way to Success.

The tech trip to NYC continued this year for its third iteration and was headed by new leaders: Alvin Chitenea and Marc Esposito. Twelve students were selected to go on the trip and meet with alumni founders and professionals at companies such as Givkwik, Peatix, Alley Interactive, and more. During downtime, students got to know each other and practiced pitching at Madison Square Park. Our next trip will be during Spring Break for the third annual Silicon Valley trip. 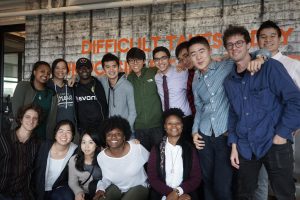 This trip was one of our first programs and starting next year Kai alumni will be working in San Francisco and able to give office tours to students. Time sure flies!

This semester many of the senior Kai team members are involved in teaching the Kai student forum called Kai Labs. Two years ago Mika Reyes taught her first student forum on Human Centered Design and from that experience she created a new project-based class that serves real clients in the Wesleyan University community. Kai Labs is divided into two sections and has already enrolled the maximum of 30 students. The engineering section is headed by Daichi Onda and Tim Kim and the Product Manager section is headed by Alex Garcia, Cindy Horng, Pi Paticha, and Mika Reyes. The Kai team is really excited to be involved in our third student forum. Kai Labs will be more integrated with the Kai organization compared to the previous two forums; last semester, Kai member Marc Esposito taught a Community Consulting student forum and two years ago was Mika’s Human Centered Design student forum. 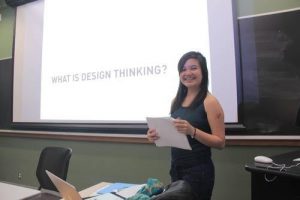 Student Forums are full credit classes taught by students that have faculty advisors and count towards graduation both for the instructors and students.

In the coming months we’re excited to see our new members take on added responsibilities and come up with their own ideas for programs and partnerships. A main task ahead is fundraising for upcoming trips, our website costs, and competitions and hackathons. We’re looking forward to continuing our educational programs in entrepreneurship and ensuring a diverse group of students get all the access and resources they need to succeed.

In terms of my Patricelli Fellowship project I have been hard at work trying to answer fundamental questions about the future of transit. This work has entailed reading and analyzing the planning documents of transit organizations such as Taipei Metro, New York MTA, Bay Area Rapid Transit, and San Francisco MTA. My larger questions center around how autonomous vehicles fit into this equation and how the two systems will work together and be affordable.

A great part of being part of the fellowship is that I have been able to conduct in-person focus groups with my cohort to understand how people currently get around and what their pain points are in car-dependent Middletown, Connecticut. With the introduction of rideshare services such as Uber and Lyft last year, things have dramatically changed for the students that don’t own cars. Price is still an issue, and that is where I’m looking at solutions to bring costs down. 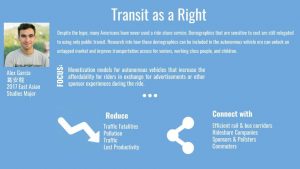 In the meantime I’ve been working on smaller achievable projects such as increasing awareness of existing public transit options in Middletown by writing short tip posts in the campus blog Wesleying. In addition, I’ve been adding pressure to the local transit agency to put their timetables on Google maps so that more students will be aware that there is even public transit in Middletown and be able to plan trips easier. This work will take time, but is much more tangible than the more future facing parts of my fellowship project. I’m looking forward to having more done as the semester progresses!