This announcement comes to us from Professor of American Studies, J. Kehaulani Kauanui:

The Hipster Dollhouse: An Exploration of the Wes Anderson Aesthetic, Rachael Sonnenberg (‘19

A Hipster Postmortem — what killed the hipster? Alex Tenenbaum (’19)

Providing a critical genealogy of the figure of “the hipster,” the class focused on the racial history of the origins of the concept. Derived from the term used to describe these earlier movements, the term “hipster” reappeared in the 1990s and became especially conspicuous in the 2000s to the present. Today’s hipsters are generally associated with whiteness, indie music, a vintage fashion sensibility, liberal political views, organic and artisanal foods, as well as racial gentrification in urban neighborhoods in Brooklyn and select cities such as Portland and San Francisco. Perhaps curiously, members of this subculture typically disassociate themselves from this cultural category, as outsiders often use the term hipster as a pejorative. The course also focused on contemporary discourse about hipsters, along with a historical analysis of the term and its use in popular culture to get a better understanding of race, class, gender, and the commodification of style. Other topics included: stereotypes, authenticity debates, hipster racism, so-called “blipsters,” the death of irony, hipster chic, “hipster run-off,” the resentment of hipsters, and forecasts of “the end of the hipster.” 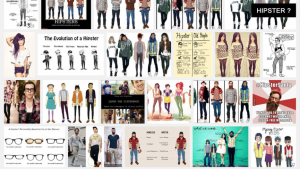