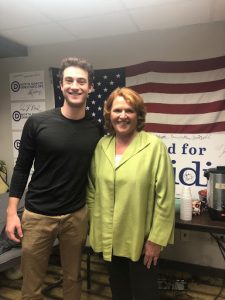 My time working for Sen. Heitkamp’s reelection campaign was nothing short of eye-opening. My goal was to work for a competitive statewide race in a region I had never experienced, and North Dakota checked all of those boxes. After landing in the tiny airport in Bismarck (the capital of ND), I realized I had absolutely no idea what I was in for. But after a week of working with great people, connecting with voters, and beginning to understand the uniqueness of North Dakota politics, I was sad to leave.

Politics within the United States is often divided into two categories: good and bad. If others agree with your beliefs, then they generally have ‘good’ political beliefs. If they disagree, their beliefs are ‘bad’. In North Dakota, however, many of the people I talked to were less concerned with the overall conceptions of party, ideology, and national appeal and were more interested in meeting individual candidates, hearing what they had to say, and understanding the tangible benefits that could be brought to them from one candidate or another. This was refreshing, but I was also unsure of how to approach some of these conversations. After all, isn’t it a little odd that a state Trump won by 36 points could, just two years later, reelect a Democratic Senator?

However, I quickly realized that issues North Dakota voters were most concerned with were the fundamental ones: jobs and healthcare. They were less interested in national rhetoric and more interested in material impacts on their state. I would highly encourage anyone who is intrigued by the current landscape of American politics to visit a state like North Dakota and talk to voters. The experience will be unique, enjoyable, and, above all else, incredibly informing. I really enjoyed my time in North Dakota and would like to thank the Jewett Center for making it possible!