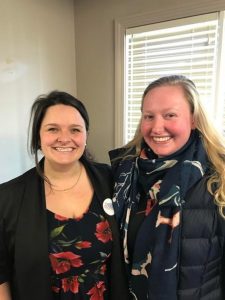 My main goal for volunteering for Theresa Govert was to get a better understanding of Connecticut politics outside of Wesleyan. I had never canvassed before, but the Govert volunteers were encouraging and supportive. When I was canvassing, the houses on my list were supposed to be registered democrats, i.e. people who would be receptive to hearing about the Democratic candidate running in their district. However, there were a few times our data wasn’t accurate, people had moved, or their beliefs had changed. There were a few people who shut the door in my face, but for every time I had a door shut in my face, I had a positive conversation with another voter. Every time I knocked on a teacher’s door, as soon as they saw I was with Theresa, their immediate response was, “Oh I’m a teacher, I’m voting for Theresa!” I was thrilled to hear that the candidate I was supporting was a champion for public schools. One immediate connection was able to make with Theresa was that she babysat my writing professor’s son when she was in high school!

One of the most important things I learned that it is best to ask for help if you are confused. When phone banking, a few people asked questions about Theresa’s position on tolls and taxes in Connecticut to which I didn’t have an answer. Luckily, Charlie, the field manager, was more than happy to help answer the questions. It was also interesting to hear about the political dynamic in the 34th district. The other volunteers told me that this race could be decided by a few votes: literally by the people who show up on election day. Though I’m not a Government major, I am from the swing state of Pennsylvania, so I am well aware of how a few votes can decide an election. The summer after I graduated from high school, I volunteered for Katie McGinty’s campaign for Senate. That was a valuable experience, but I only saw McGinty in the Philadelphia office once. Alternatively, Theresa came canvassing with the rest of her volunteers, and made an effort to speak with me personally.

Working for the Wesleyan Fund prepared me for the experience of working on a campaign because the majority of our work involves calling alumni and asking them to donate to the university. With this experience, it was easy to jump into phone banking and work through difficult conversations. If anyone is looking to get involved, don’t hesitate. Campaigns are always looking for volunteers, and it is a great experience to work on projects, see how an office functions, and work directly to see change implemented. In my experience, it’s definitely worth it to make that call or send that email, because you can meet some brilliant volunteers and inspiring candidates.