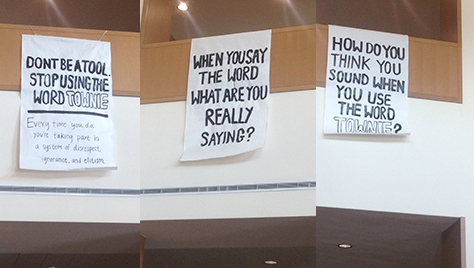 A couple days ago, a series of banners were displayed in Usdan urging students to not to use the word “townie.” The banners are part of an effort by the Middletown Wesleyan Relations Committee (MWRC) to work towards their wider goal of “expanding and strengthening the Middletown-Wesleyan relationship.”

The word “townie” is often thrown around on campus when referring to Middletown residents, often with negative connotations. I spoke with Haenah Kwon ’17, a member of the MWRC who worked on the banner drop, to learn more about the current campaign. She explained that the banner drop was an effort to start a discussion:

We wanted to ask the questions instead of just actually do a concrete project. We want to start the campaign with this and later we want to connect it to other students groups who are based in Middletown, such as Middletown potluck, to start a productive discussion and find a concrete solution, but for now we’re just aiming to stimulate discussion.

When I asked Haenah what term should replace “townie,” she responded with some questions of her own:

However, acknowledging the reality of the boundaries that exist, Haenah believed that if a replacement was really necessary, “Middletown residents” would suffice. She continued, “just ‘townie’ has so many negative implications.”