In March 2015, Claudia Kahindi ’18 and Olayinka Lawal ’15 were awarded a $10,000 Davis Projects for Peace grant to implement an English language education program in Claudia’s home town of Kilifi, Kenya. The program is named Kiu for the Swahili word for “thirst,” evoking the idea of “thirst for knowledge” or “thirst for success.” 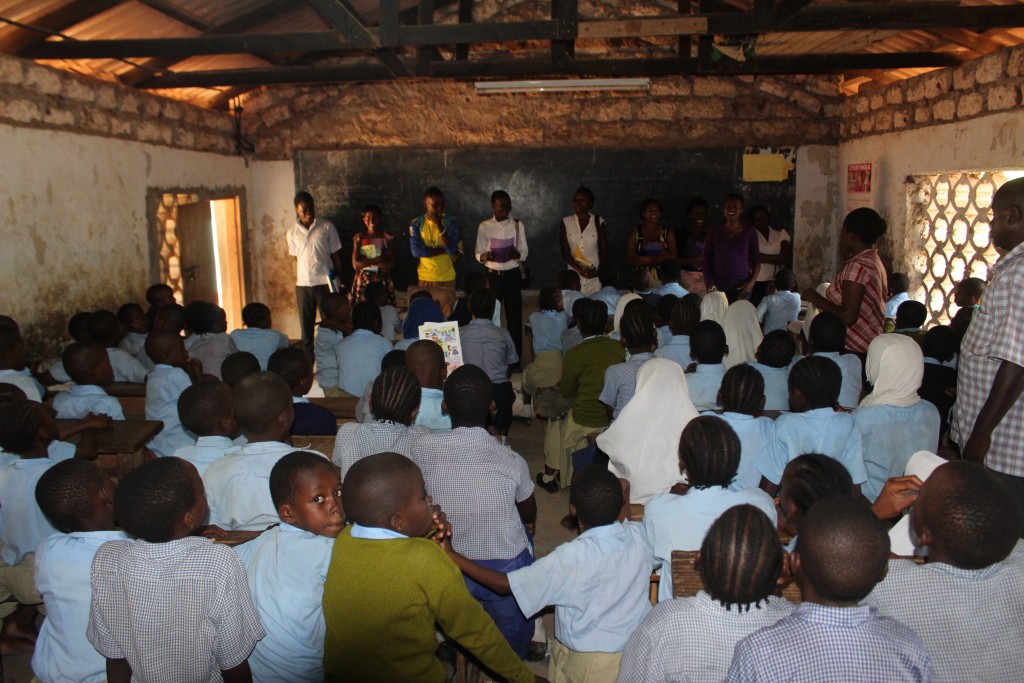 The Kiu mentors, university students from the Kilifi region, meet their students on the first day of the program.

The Davis Projects for Peace grant, given annually at a select group of colleges including Wesleyan, funds grassroots summer projects anywhere in the world which promote peace and address the root causes of conflict among parties.  Applicants are encouraged to use their creativity to design projects and employ innovative techniques for engaging project participants in ways that focus on conflict resolution, reconciliation, building understanding and breaking down barriers which cause conflict, and finding solutions for resolving conflict and maintaining peace.More information about the application process and past winners is available here.

Last spring, Wesleyan did a story about Kiu here, and this month, the Argus wrote about it here. Below you’ll find Claudia’s recap of her experience leading the program on the ground in Kenya. 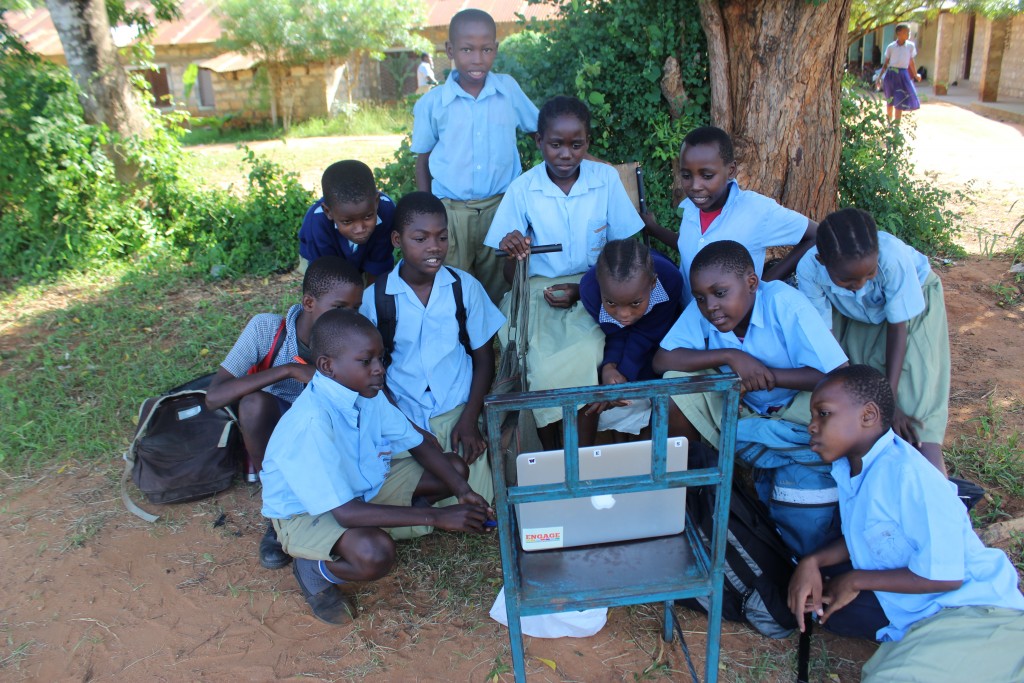 The grant funded several pieces of hardware which are now being used at Kilimo Primary School. (We were especially happy to see the ENGAGE sticker in this shot!)

KIU aimed to foster a strong understanding of the English language among at-risk fourth graders at Kilimo primary school in coastal Kenya. Success for young people in this region is predicated on knowing English; through mentorship and reading, we sought to elevate opportunity for our students.

Other Fundraising:
The $10,000 Davis Projects for Peace grant covered all of our expenses. In addition, we sourced hardware at a discounted rate from Wesleyan University, and we obtained children’s books through a donation drive in Middletown, Connecticut, in May 2015.

Project Details:
By the end of the program, I could see great improvement in the children’s attitudes towards the English language. Their command of grammar and their willingness to speak in English improved tremendously. When the project started, it was difficult to engage the kids in speaking English, but that changed as we continued to interact with them. They started speaking in English despite their grammatical errors and the inclination towards their native tongue. Some would correct each other in the middle of a conversation. The kids developed an eagerness and curiosity to learn—especially about things they weren’t aware of before. This curiosity was demonstrated by the kids’ growing participation in class. The movies we watched and the foreign storybooks stimulated their thinking. Furthermore, the whole school was in sync with our project, and students in other grades approached us with questions.

A main goal was to provide mentorship and serve as role models. This worked as the kids started opening up about their academic and future interests. During our fourth week, we focused on careers and this provided an opportunity for the students to start thinking about their own options and how to work towards them. At first it was not an easy concept for the kids to comprehend, but eventually most of them had an idea of the terminology and what careers they were interested in pursuing. Another positive outcome was the addition of resources to the school. When I first went to see the head teacher in his office, I was astonished to see it in a deplorable state and without a single laptop. When we were done using the project’s laptops during the six-week camp, I donated two laptops to the school. The administration was excited to work with the new hardware. I was touched when I found one teacher using one of the laptops for class work. The 100+ storybooks we donated to the school allowed these kids to travel mentally across the globe while simultaneously improving their comprehension of English.

We had a few unanticipated challenges. The bureaucracy of the Kenyan system proved difficult because I had to go through a relentless hierarchical chain before I could start implementing the project. In the middle of the project timeline, there was a teachers strike. I was shocked as the strike paralyzed our program for four days! Another challenge was in the students’ level with English prior to the program. I discovered that we had overestimated the kids’ prior knowledge of the English language, and hence we had to crawl through the execution of the syllabus, tweaking as the weeks went by.

The remaining challenges that we faced were expected. Expectedly, we had a handful of uncooperative people, from the teachers, mentors to the kids. We also had a few power shortages that led to interference with our project activities such as watching movies. Fortunately, we did not face language barriers or budget constraints.

Many people benefited from this project. The 108 grade four students who were the main focus of our program advanced their English skills, got to do exciting activities, and even their parents lauded us for having an impact on their children. The mentors and the three teachers that we hired earned a stipend, gained a new sense of relevance in the community, and felt the gratification of seeing the children’s progress in such a short time. The entire school will benefit from the resources we have provided them, from a storybook library to laptops. We gave motivational talks to the grade seven and eight students, so as to encourage them to work smarter, and I think there is a definitely a few whose trajectory we changed through our short speeches.

Overall, the project affected the entire Kilifi community, as the grant’s money circulated in its economy through the modes of transportation that we used, cybers, the hardware shops and the restaurants that we had our lunches in.

Long Term Impact:
Our initial aim was to eventually curb insecurity in Kenya by ensuring that student’s trajectories were changed through enforcing the mastery of the English language. Of course, it is impossible to achieve that goal in one summer; however, we made a noticeable step in that direction.

Our aim was very ambitious; however we commenced a process that could ultimately turn this aim to a reality. Looking back at the same kids six weeks later, I saw transformed students with a passion in their eyes to learn more and smiles full of hope. Whenever I reflect on the final photograph I took of “my kids” (as everyone calls them now), I am filled with joy because I see a generation changed due to our work.

KIU will be sustained through volunteers and organizations like Rotary Club-Kilifi. Jennifer Grimm, a Kilifi R.C. Member, is introducing an exact replica of KIU (with my permission) to a different school in another region called Takaungu, which also has a huge thirst for education. Charity Kaluki, another member, will also continue teaching the same kids that I was mentoring, but using a different program that also emphasizes on comprehension of the English subject. Rotary Club’s rotaractors based in the neighboring Pwani University will also provide mentorship to my kids to ensure continuity of what we began. Through all this support, I see a future for KIU.

Closing:
Ancient Chinese philosopher Laozi once said that “the journey of a thousand miles begins with a single step.” KIU’s debut this summer is the single step towards peace for many in Kenya. The wonderful thing about peace is its ripple effect. It not only affects its intended focus area but permeates through all areas of life. KIU demonstrated just this by positively influencing its intended beneficiaries – the students – but also the school, teachers, mentors, parents, and community members. This is our greatest accomplishment, that one course of action has the ability to impact more lives and ultimately, the peace of Kenya.

What is peace to us? Peace is the opportunity to gain more from available resources, impact the mindset of many, and ultimately develop the perspective to make and live a better life through sound education.

Personal Statement:
“I learned more than I have in my 20 years of existence in 2 months. KIU ended up being an eye opener on the immense needs in my society. I was impelled to do more, but I cannot do everything. This was the most important lesson for me because I think it’s the first step towards becoming a better social entrepreneur. I cannot cure all the ills in my society, but I will give my all on whatever I focus on.”
–Claudia Kahindi, Wesleyan Class of 2018