WesAGE Featured on the Wesleyan Argus

On February 18th, The Wesleyan Argus featured WesAGE in an article by Sarah Connolly:

The Wesleyan Alliance for Generational Exchange (WesAGE) is a community outreach program that seeks to build relationships between University students and residents of various assisted living facilities in Middletown.

The organization is composed of two parts. The first is the Companions Program, which pairs students one-on-one with an elderly companion from one of the four public assisted living facilities with which they work: Heritage Commons, Wadsworth Glen, One MacDonough, and South Green Apartments. Students are partnered with residents based on shared interests, and they find a time that works for both of them to meet once a week. From that point forward, each pair works to build a relationship.

The second part is the One MacDonough Social Hour. Held for an hour every Friday afternoon, this program gives students the opportunity to spend time with the residents, playing games, eating snacks, and just hanging out. Sometimes, the program collaborates with other campus organizations to host events during Social Hour, such as a cappella concerts. 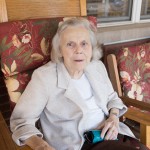 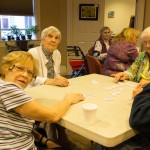 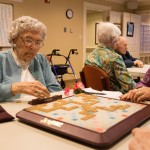 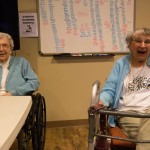 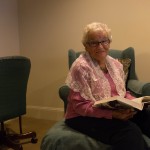 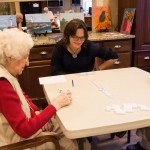 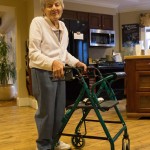 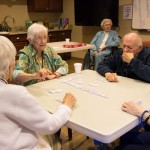 “We work with all elderly residents who are anywhere from their 70s to their 100s,” said Carolina Elices ’17. “Some of them have lived in Middletown for most of their lives. Some of them used to work at Wesleyan or have children or grandchildren that went to Wesleyan. A lot of them have a Wesleyan connection, but they don’t always have a lot of visitors. We give them company and let them know that someone is thinking about them and wants to spend time with them.”

Continuing the work of Rachel Earnhardt ’17 and Joanna Paul ’18, both of whom coordinated the program last semester and are currently abroad, Elices run WesAGE alongside two other students. Gabe Borelli ’16 serves as the program’s main coordinator for the Companions Program, while Sheri Reichelson ’16 and Elices are in charge of Social Hours. Though all of the coordinators have been involved in WesAGE since they were first-year students, this is Elices’s first semester with a leadership position in the organization.

The group has weekly coordinator meetings, where they talk about their present progress and make plans for future initiatives.

“This semester, we are trying to put on a dessert fair, which is something we usually do during the spring semester,” Borelli said. “We invite Wesleyan student organizations like a cappella groups to perform and ask restaurants on Main Street to donate desserts. The residents get to see our groups perform while eating desserts from all over the place.”

Though events like these may seem light-hearted and carefree, WesAGE keeps its obligations in sight. The organization’s main goal is to build relationships between University students and the assisted living residents.

“We are trying to fill a social gap in the older residents’ lives,” Reichelson said. “It is great to see the joy that the residents get when they interact with us, either through the performances we bring them or the stories that they get to share with us. I interacted very closely with one of the residents, and she showed me a lot of her old family photo albums. She doesn’t have family close by, and her husband died. I think she really enjoyed sharing those photos with someone else. It is great for them to interact with people outside of their senior center bubble.”

“It’s really fun to see how happy the elderly companions will get,” Borelli said, elaborating on the positive impact WesAGE has had thus far on the livelihood of Middletown’s elderly. “I don’t think they have the chance to interact with many people, so when we go visit they get very excited. One woman loves to play dominos, and she just gets so excited about them. I didn’t know there were actual rules to dominos, so she she taught me. We set up a haunted house this fall. It wasn’t even scary, but they were still so excited about it. They love to hear about us, and we love to hear about them. It’s a great relationship.”

This relationship is most definitely not one-sided. This program is just as meaningful and exciting for the University students as it is for the elderly residents.

“Spending time with the residents has been my favorite part of every week since freshman year,” Elices said. “It is great to take an hour out of my life, forget about everything else, and spend time with other people. On campus, we can become stuck in the Wesleyan bubble of 18 to 22 year olds, so it is good to spend time with people who have a lot of life experience to share. It is also really fun to play games with them. One of the residents is really good at Scrabble, and we have developed a great relationship through that—even though she always wins! It’s been really rewarding to give up my time to spend it with other people and not think about myself.”

Expressing similar enthusiasm, Reichelson discussed the compelling stories that WesAGE volunteers have the pleasure of hearing from their companions and other residents of the assisted living facilities.

“I interacted with a resident who is a Wesleyan alumnus,” Reichelson said. “I believe he graduated in 1942 or something crazy like that. He shared stories that he remembered from Wesleyan, and I updated him on how Wesleyan is today. He asked me to start bringing him copies of The Argus, which I have been doing every week. I actually ran into him in Exley a few weeks ago, and he was shocked to see how much the building has changed since the 1940s. Seeing what the school was like through the eyes of someone who was here forty years ago is a pretty unique experience.”

Borelli agreed with Reichelson, citing how interesting it was to learn about the rich history of various residents.

“My former companion, Tom, was a really interesting guy,” Borelli said. “We had so much in common. We both came from large families with five siblings, four brothers and a sister. He would tell me all sorts of interesting stories about how he served in WWII and traveled around Connecticut after the war. It was really humbling to hear his stories.”

Elices appreciated when residents would share their immigrant experience with her, immersing her in the cultures of their previous lives.

“One of the residents is from Germany, and one time she showed us these love letters that her husband wrote her,” Elices said. “That was really sweet. She also showed us pictures of her of her in a traditional German dress with her husband and friends. It’s really nice to see the physical memories of what people’s lives were like.”

“It is great when students find out about us through other students and talk on campus,” Reichelson said. “We have begun to realize that WesAGE has a presence on campus and that people truly do want to get involved. It is not just us recruiting people anymore. It’s really nice to know that other students see what us coordinators see in the program.”