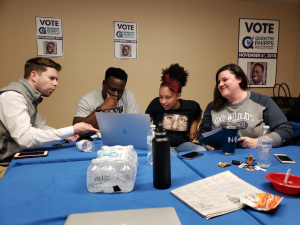 “Mike (left) does an exceptional job posing for this campaign meeting photo-op in the Middletown DTC Headquarters.”

My goals included helping candidates reach election day and using these opportunities to network. I spent time phone banking for Quentin Phipps in the Middletown DTC HQ and handling administrative work and data entry for Rosa DeLauro’s campaign manager in her campaign office as part of an ongoing internship. I have been developing relationships with various people connected to the campaigns. I hope to specifically use my campaign internship with DeLauro to acquire an internship on Capitol Hill next summer.

One of the things I learned during a campaign meeting is that the Wesleyan student body is divided among three polling locations in Middletown based on the part of campus where they live. This poses as an unfair barrier to Wesleyan students making use of their civic rights. The split of the three polling locations would make for a seemingly unnecessarily difficult division of places to vote. Students also need to re-register their new dorm/house address from academic year to academic year in order to vote in each election, but also then go on to find out where their polling place is, and depending on the distance, make plans for how they are going to get there on election day. The locations are either far enough away that students would realistically need to drive to get there, or they are inconveniently located, or both. By distributing Wesleyan’s student population among three locations instead of just Fayerweather it adds unnecessary complexity to the system. Usdan is where most students eat at least once a day, meet peers, and join up for club meetings. It is a central location for nearly every student on campus. It’s puzzling that the state government would see fit to divide up the student body among various polling sites when one so central to the student body is capable of handling the potential load on election day and require students to register to their place of residence instead of their PO Box address for each election. 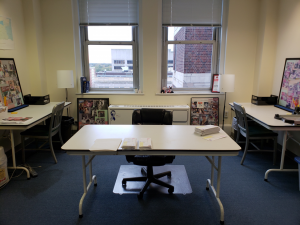 Classes at Wesleyan have given me the experience to confidently voice my opinions to candidates when appropriate and when asked. This applies to how to handle day to day decisions that campaigns have to make, when to speak out about the actions of the opponent, or what specific wording to use when answering endorsement questionnaires. 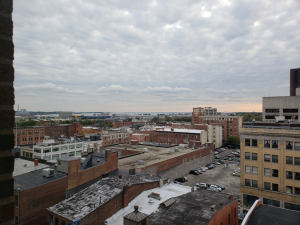 I know for some people it can be difficult to imagine working for campaigns when politicians have something of a reputation for being corrupt, lacking morals, unsympathetic, etc. I also had this concern, and I still do. I was extremely disillusioned with the Democratic party after the 2016 primaries and was incredibly displeased with the results of the presidential election. However, after months of unproductive hand wringing, I decided to pay attention to politics at the local level. I now realize that for many people local candidates can offer the politics and policy that they believe in. If you want a certain kind of politician to thrive, look to your local candidates and representatives. Get involved, show up to a phone banking session, attend local government meetings, donate to candidates, you can do so many things that help contribute to real change. Campaigns usually need all the help they can get and will provide internships to those who ask. Supporting candidates enables the potential for them to ascend to a higher office, to serve as a role model for others for what politics can look like, for what politicians can be. An ideal many people advocate for is to be the change you wish to see in the world. I’d like to think supporting candidates that embody the change you wish to see is just another of way achieving that ideal. 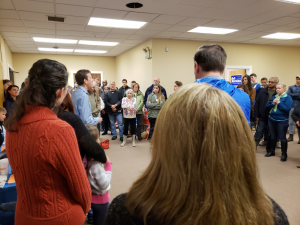 “Photo of Middletown GOTV rally at DTC HQ. Featuring Matt Lesser speaking about the issues. Laurel Steinhauser to the left, Mary Abrams on the right. Chris Murphy stands in front of Mary. 10/27/18.”