After Charleston: Next Steps for the Movement for Social Justice 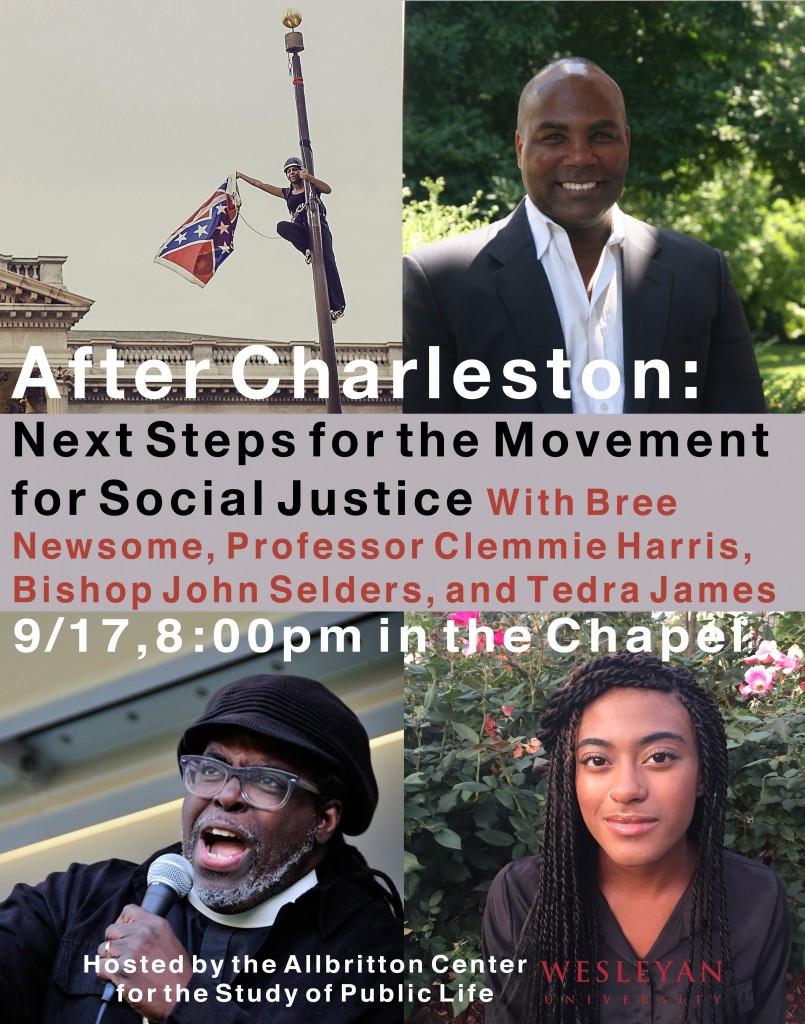 The Allbritton Center for the Study of Public Life is thrilled to announce a panel for September 17th at 8pm in the Chapel titled After Charleston: Next Steps for the Movement for Social Justice. It will feature Bree Newsome, Professor Clemmie Harris, Bishop John Selders, and Tedra James. “The idea is to spur conversation with the audience about the killings in Charleston, reactions to killings, debate over the Confederate flag, and protests in Ferguson,” said Rob Rosenthal, director of the Allbritton Center for the Study of Public Life, John E. Andrus Professor of Sociology. “The question that each speaker will address is, ‘What now? Where are we in this long, long, long struggle for social justice—that is, equal rights, equal opportunities for everyone in the country—and what needs to happen next?’ Each panelist will speak for about 10 minutes, and can respond to anything the other speakers said. Then it will be up to the audience to state their own opinion, and ask questions of the audience.

The panel is cosponsored by the African American Studies department and the Office of Equity and Inclusion.

More about our Speakers:

Newsome is a graduate of New York University’s prestigious Tisch School of the Arts where she received a BFA in Film & Television. While still in high school, Newsome created an animated short, THE THREE PRINCES OF IDEA which earned her a $40,000 scholarship from the National Academy of Television Arts & Sciences. Academy President Peter Price described Newsome’s work as a”combination of intellectual horsepower and creative range.” At NYU, she wrote and directed a humorous public service announcement called YOUR BALLOT, YOUR VOICE encouraging youth voter turnout. The PSA went on to win Grand Prize in a PSA competition sponsored by Tisch and MTV. Newsome’s short film WAKE won a slew of awards on the film festival circuit and recently made its national television debut on the ASPIREtv network.

Based on her work as an undergraduate student at New York University, Newsome was invited in 2011 to serve as the first ever Artist-in-Residence at Saatchi & Saatchi, a global creative communications and advertising company headquartered in New York. In August 2012, Newsome wrote and recorded a rap song, “SHAKE IT LIKE AN ETCH-A-SKETCH!”, skewering presidential candidate Mitt Romney and criticizing the Republican Party for policies that promote classism and bigotry. Newsome then directed and edited a music video for the song which she released on YouTube. The video immediately drew attention from political bloggers including The Huffington Post: “The video doesn’t pull punches, and its subtext just might ring true to the ears of voting Americans.”

A staunch advocate for human rights and social justice, Newsome was arrested last year during a sit-in at the North Carolina State Capitol where she spoke out against the state’s recent attack on voting rights. She continues to work as an activist and youth organizer in North Carolina, serving in the capacity of Western Field Organizer for the youth-led organization Ignite NC.

Read Bree Newsome’s statement after she scaled the flagpole outside the South Carolina state capitol and removed the Confederate battle flag.

Clemmie Harris is a Visiting Assistant Professor in the Center of African American Studies at Wesleyan University. He is a former Postdoctoral Fellow in the Center for Africana Studies at the University of Pennsylvania, where he received his Ph.D. in History in 2013. He holds graduate certificates in Urban Studies and Africana Studies and has received fellowships for research in areas such as Democracy, Citizenship, and Constitutionalism and Africana Studies. Dr. Harris teaches courses in African American History, the African Diaspora, and Public Affairs. He is also a distinguished teacher of African History. His research interests include: the long African American freedom struggle with an emphasis on electoral and protest politics, race and social inequality in the 20th century industrialized urban north; African American Political Leadership, and Black Urban Political Economy.

He is currently working on two book projects: “We Will Be Heard: The Struggle For Political Recognition and Civil Rights in Philadelphia,” which examines the African American quest for electoral power and community control from 1911 to 1984. The second book project is a biography of W. Wilson Goode, Sr., that chronicles the life and political career of Philadelphia’s first black mayor up to the age of Obama.

Additionally, from 2008 to 2011, Dr. Harris served as a high level policy advisor to former New York governor David A. Paterson. His leadership helped influence a series of racial, social, and economic reforms to include: drug law reform, New York City’s anti-racial profiling policy, economic justice initiatives-especially the development and enactment of 2010 Business Diversification Act; the development of the state’s first Chief Diversity Officer, and the establishment of one of the strongest minority and women business enterprise programs in the nation. Dr. Harris is also a longtime mentor of urban youth.

The Right Reverend Doctor John L. Selders, Jr. is an ordained minister serving in the United Church of Christ, the Organizing Pastor of Amistad United Church of Christ, Hartford, CT, Associate College Chaplain, Trinity College, Hartford, CT, Executive Director of Zezzo House (an 18 unit housing project) and one of the leaders of Moral Monday CT. He is the loving spouse of Pamela and father of two, Alisia (daughter), Jay (son) and grand parent of one, Makenzie (granddaughter).

Bishop Selders has done his academic and theological reflection attending Life Christian Bible College, Webster University, Eden Theological Seminary and Anglican Divinity School. In addition to being a talented award winning songwriter, musician and performer with local, national, and international credits, he is also the Bishop Presider of The Inter-Denominational Conference of Liberation Congregations and Ministries (ICLCM) and is the Co-Convening Bishop of The Sacred College of Progressive Episcopates (SCPE).

Bishop Selders is a founding member of Moral Monday CT, a grassroots statewide organization committed to a wide range of social justice issues. Bishop Selders has exhibited extraordinary commitment and dedication to a number of efforts that have afforded him the opportunity to travel across the country speaking, lecturing and conducting workshops in the areas of race, anti-racism and internalized oppression. He is a teacher, lecturer, workshop leader, an HIV/AIDS educator and activist with numerous citations for his work.

John worked for 12 years as a Lecturer at Yale Divinity School in New Haven, CT., Adjunct Faculty Member in the Field Education Department of Andover Newton Theological School, Dean of Urban Ministry Track for The Anglican Divinity School and is an adjunct faculty member for The Seminary Consortium for Urban Pastoral Education. He serves on a number of boards and works with several organizations both locally and nationally whose work is ultimately concerned with the healing of humanity.

Tedra James is a sophomore at Wesleyan and a prospective double major in Neuroscience & Behavior and African-American Studies. Tedra has interned for WE ACT for Environmental Justice and is currently working as a Student of Color Coalition Intern with Student Activities and Leadership Development. She has been both passionate about social justice and enthralled by science as long as she can remember. Her focus during the past year has been concerned with intersections of feminism and race issues (or womanism), mental and environmental health disparities for low-income communities of color, and strengthening global solidarity between Black Americans and victims of imperialism.