Hannah Doress ’88 writes in about her time spent as Campaign Manager for #TakeBackYourToxicTrash in South Carolina to protest a company, Novolex, that is trying to overturn environmental protections and continue polluting the environment with plastics:

California environmental organizations Save The Bay (Paul Kumar ’84 is Political Director) and Clean Water Action travelled to Hartsville, South Carolina on October 5 and unfurled a 30-foot banner outside the headquarters of Novolex, the world’s largest manufacturer of single-use plastic bags, to ask for a meeting with Novolex chief executive Stan Bikulege. The groups made the “house call” to demand that Novolex cease its efforts to defeat Prop. 67 on California’s November ballot, which voters must pass to uphold the state’s groundbreaking ban on single-use plastic bags that litter our landscapes, foul our waterways and harm our wildlife.

Novolex is the biggest spender among the out-of-state plastic bag manufacturers that have put more than $6 million into their attempt to overturn California’s ban on single-use plastic bags, according to the latest figures issued by Secretary of State Alex Padilla.

The industry funded the signature drive to put SB 270 on hold and place it before voters as Prop. 67, and is now working to defeat it. The industry also placed a competing measure, Prop. 65, on the ballot to confuse voters. 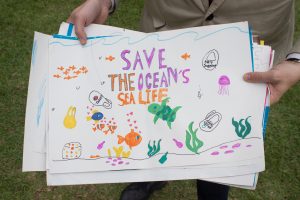 “We gathered 50,000 signatures from our supporters in California, asking Novolex to keep its dirty out-of-state money out of our politics, and we wanted to present them to Mr. Bikulege and ask him to withdraw his financial backing for overturning the ban,” said Matt Davis with Clean Water Action, speaking in Hartsville, SC. “We don’t like that Mr. Bikulege and his friends are hiding behind D.C.-based front groups as they profit from killing California’s wildlife, but he won’t even meet with Californians to hear our point of view.”

Novolex representatives said Bikulege was unavailable, but the environmentalists were able to speak briefly with the company’s vice president for sustainability, Mark Daniels. Daniels refused to accept the Californians’ petition or to reconsider the company’s strategy of attacking California’s environmental protections. 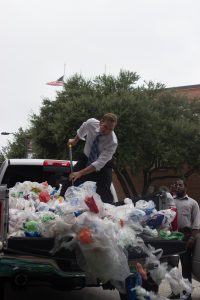 The environmentalists then unloaded thousands of plastic bags collected from California shorelines, waterways, and households, and displayed childrens’ drawings of wildlife threatened by plastic bags.

“We’re asking Novolex to take back some of the toxic trash they generate here in California, and to stop undermining California’s environmental protections,” said Cyril Manning with Save The Bay, speaking in Hartsville, SC.

“Californians are tired of out of state companies trying to influence our elections and despoil our environment. We will vote Yes on Prop. 67 to uphold the country’s first statewide ban on plastic bags, and vote No on Prop. 65, the industry’s deceptive attempt to undermine our state’s bag ban,” said Manning.

Rep. Smith said: “This demonstration has inspired me to make South Carolina better by introducing a single-use plastic bag ban here. Our state’s businesses know better than to chase short-term profits at the expense of the environment.”

Some highlights of the protest: