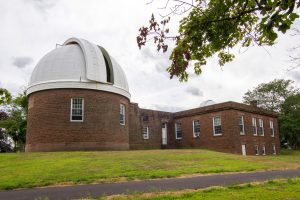 Did you know there are about 100 million black holes in our galaxy? Or that two black holes can collide and merge into one? Or that there’s an actual scientific term called spaghettification? I did not, but I learned all of this and more, as well as looked through one of Van Vleck’s telescopes for the first time in my Wesleyan career, when I attended a Space Night lecture on Wednesday.

Space Night is a program run by students in Professor Meredith Hughes’ class, Seminar on Astronomical Pedagogy. This is a service-learning course, or a class that combines an academic curriculum with meaningful community service and time for reflection on both of these components. (It’s also cross listed with the Civic Engagement Certificate and The Study of Education Certificate.) In this course, students learn how to present complex astronomical topics to a general audience in a way that is accessible, understandable, and interesting.

I attended Hannah Fritze’s lecture on black holes, along with a few Wesleyan students and several members of the greater Middletown community. Previously, my only “knowledge” of black holes was that they had a very strong gravitational pull and could suck in things around their edges. Hannah elaborated on the three types of black holes that exist/are believed to exist, the differences between them, and how they form. I was shocked to learn there is a supermassive black hole in the middle of the Milky Way galaxy that is four million times as massive as the sun! We also can’t “see” black holes, but can detect where some are through several means.

Black holes don’t suck in everything around them, but if something falls within its Schwarzschild radius (or the boundary of that black hole), it will get sucked down. If a person were to fall into a black hole feet first, they would be “spaghettified” (this is a real, scientific term), because the gravitational pull on their feet would be stronger than the pull on their head, and they’d essentially turn into a human noodle. Scary, right? 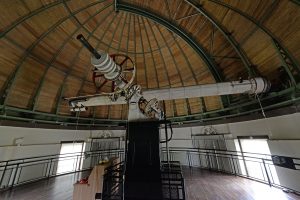 The nearly century-old 20-inch Van Vleck Refractor, which lives on Foss Hill in its iconic dome.

Thankfully, Hannah assured us, the chances of the Earth falling into a black hole are basically zero.

After Hannah’s lecture, we had the opportunity to look through one of the telescopes at the observatory. When I looked through, I saw a tiny white dot with a bluish tinge — I was assured this was the planet Neptune. Even though it was small, it was pretty amazing to think I was seeing something over 2 billion miles away.

Whether you know a lot about outer space, or nothing at all, Space Night is a great way to learn about astronomy. Not only will you be treated to an interesting and understandable lecture by a current Wesleyan student, but you’ll get a chance to observe the skies (weather permitting) using one of the Van Vleck Observatory’s telescopes.

Space Night occurs every Wednesday from 8-9 pm (the lecture is for the first ~20 minutes, followed by observation time), and there are also Kids’ Nights on the first and third Fridays of every month from 7:30 – 8:30 pm. More information, and the calendar of events, can be found here.