Haiti: Migration and Globalization
Haitians in the U.S. vs. Trump

Tens of thousands of Haitians who currently reside in the United States on Temporary Protected Status face possible deportation by the Trump administration.

This talk will focus on the domestic and global political and economic factors that transformed Haiti into an exporter of labor to the United States and other countries in the hemisphere in the twentieth century and beyond.

Alex Dupuy is John E. Andrus Professor of Sociology at Wesleyan University in Middletown, CT. He is an internationally recognized scholar and specialist on Haiti. He has lectured at universities and colleges across the United States and abroad, and has given many interviews and commentaries on Haitian affairs on local, national, and international radio and television networks, including the PBS News Hour, Toronto Public TV, Democracy Now!, WBAI, National Public Radio, Pacifica Radio, the BBC, the CBC, Radio France International and the Australian Broadcasting Company. In addition to his many articles in professional journals and anthologies, he is the author of Haiti in the World Economy: Class, Race, and Underdevelopment Since 1700 (1987); Haiti in the New World Order: The Limits of the Democratic Revolution
(1997); The Prophet and Power: Jean-Bertrand Aristide, the International Community, and Haiti (2007); and Haiti: From Revolutionary Slaves to Powerless Citizens – Essays on the Politics and Economics of Underdevelopment (1804-2013) (2014).

Wednesday April 11th, 12:00-1:00 pm, Fries Center for Global Studies, FISK
Free and open to the public
Lunch will be served

Sponsored by the Allbritton Center for the Study of Public Life, Fries Center for Global Studies, and the Office of International Student Affairs 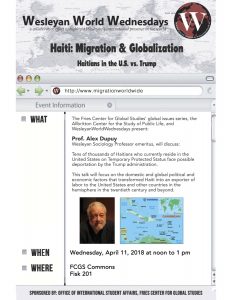